Apple is apparently cracking down on iOS anti-virus apps

Apple is apparently cracking down on the use of anti-virus apps on iOS and has started removing them from the App Store. According to Apple, these apps are ‘misleading’ as it doesn’t want customers to think that iOS devices are at great risk of viruses or malware.

This report follows the removal of Intego Software’s app called ‘VirusBarrier’, from the App Store. The app scanned emails and content stored in the cloud in order to detect potentially malicious content. 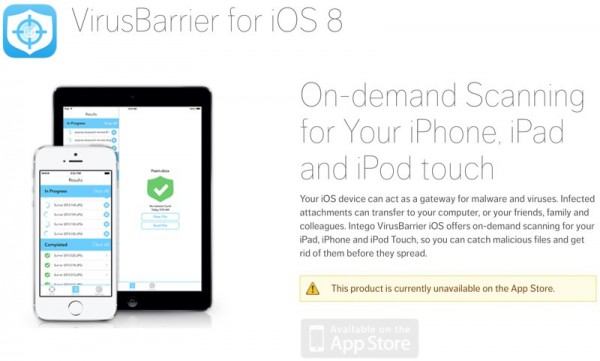 Emails containing viruses can be passed through iOS devices, although a dodgy attachment can’t directly install on an iPad or iPhone. Apple called the description of VirusBarrier ‘misleading’, the description said: “Your iOS device can act as a gateway for malware and viruses. Infected attachments can transfer to your computer, or your friends, family, and colleagues.”

“Intego VirusBarrier iOS offers on-demand scanning for your iPad, iPhone, and iPod Touch, so you can catch malicious files and get rid of them before they spread.”

According to Intergo, Apple isn’t only targeting VirusBarrier and will continue to go after more iOS virus scanning apps currently on the store, although at present, no other apps appear to have been removed.

KitGuru Says: Viruses aren’t really a big problem on iOS, which is largely down to Apple’s closed system. However, I don’t necessarily think that the presence of virus scanners on the app store is damaging to Apple’s image. Do you guys think Apple should leave virus scanners on its store, even if you are very unlikely to get a virus?