Over the last 18 months, foldable smartphones have really begun to take off. Samsung had a rough start with the Galaxy Fold but found its footing with the Galaxy Z Flip. Since then, Microsoft, Motorola and other smartphone companies have also tried their hands at foldable displays. Now behind the scenes, Apple is working on a foldable iPhone. 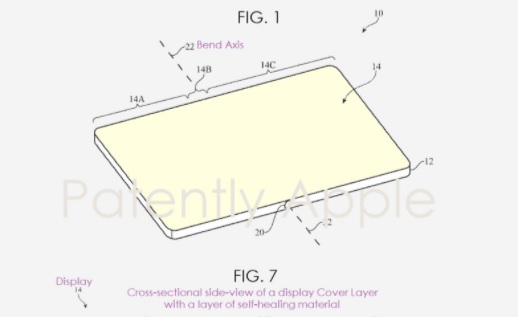 This self-healing process “may occur in the layer of self-healing material without prompting”. To promote flexibility, the display cover layer may also include “a transparent dielectric layer with slits”. These slits would be filled with an “index-matching” material.

The illustration for this device looks like it could well be a foldable iPhone, or a next-gen form of iPad. Of course it is worth noting that just because Apple has patented and experimented with this technology, this should not be considered as definitive evidence that such a device will ever release to consumers.

KitGuru Says: I'm very interested in seeing more companies try their hands at foldable display devices. A new form of iPhone or iPad would be particularly interesting. Have any of you used a foldable phone in the last year? What do you make of this latest trend?

Previous The RTX 3090 has enough GPU memory to install and run Crysis 3
Next Crash Bandicoot 4 beats Star Wars: Squadrons to no.1 in the charts