Apple may have put its TV streaming plans on hold for the time being but the company isn't quite done negotiating with studios just yet. It has come to light this week that Apple is apparently in talks with major movie studios in an effort to get new films to hit iTunes just a few short weeks after first hitting the cinema, which would cater heavily to those who prefer to watch films at home.

So far, Apple is said to be in talks with 21st Century Fox, Warner Bros and Universal Pictures, according to Bloomberg's sources. Some studios are currently pushing for rentals on services as soon as two weeks after a film debuts at the cinema, though these would cost quite a bit more than a standard film rental. 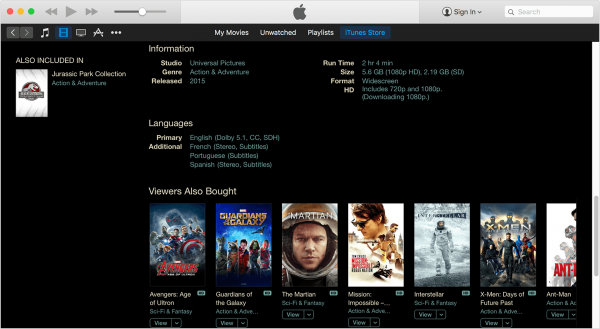 Apple wants this deal in particular as while iTunes has long been a dominant force in music, it is less popular for movie and TV show purchases. On top of that, the video streaming space is packed with competition right now. Studios appear to be keen to get films to households quicker but could end up going with another platform rather than iTunes.

According to those familiar with these talks, pricing could end up landing anywhere from $25 to $50, which is expensive but could still work out being cheaper than heading to the cinema for families in particular.

The idea of releasing movies for home viewing quicker has been knocking around since earlier this year, when Napster founder Sean Parker said he wanted to set up a streaming service that would allow users access to box-office films for £35 a pop.

KitGuru Says: I'm not a huge fan of going to the cinema these days but the wait for a home release can sometimes be a bit too much. Quicker rentals would be a great option for many, though not everyone will be happy with the proposed pricing model. Would you guys like to see studios get movies on to streaming services faster, even if it cost extra?