iOS 8 now found on 72 per cent of devices

iOS 8 had a bit of a slow start but the adoption rate is finally starting to climb up at a faster rate with almost three-quarters of all iOS devices now running the latest version, which Apple launched last year alongside the new iPhone 6.

Based on the latest statistics from the Apple App Store Distribution page, iOS has reached 72 per cent of all iOS devices, leaving iOS 7 on 25 per cent of devices and older versions on just three per cent. iOS 8 is up from 69 per cent adoption around two weeks ago. 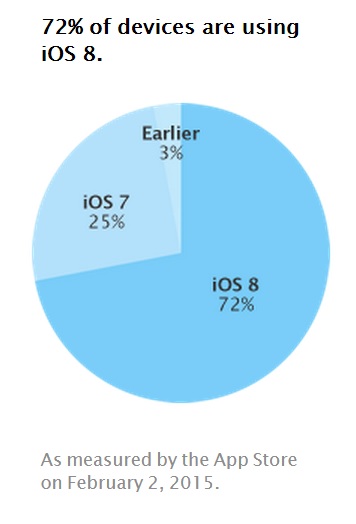 The new figure shows a slight increase in adoption following a slow period in January. At the end of last month, Apple pushed out the iOS 8.1.3 update to fix some persistent bugs and reducing the amount of space required on a device to perform an update in the first place, meaning that more users will be capable of upgrading.

iOS 8 launched back in September last year and was initially plagued with issues. Since then, Apple has been hard at work to patch things up and make sure iOS 8 was capable of giving users the experience Apple originally promised.

The next iOS update will be 8.2, which will bring in support for the Apple Watches, which begin shipping in April.

KitGuru Says: iOS 7 is still on a significant number of devices but those people will upgrade eventually. By comparison, Google's latest version of Android can only be found on just over 1.6 per cent of devices at present.