A hefty amount of information on Bungie's upcoming Destiny expansion, House of Wolves, leaked online this week, including the possible release date, along with new weapons and armor. A Reddit user managed to gain access to the hidden future content via an unknown method.

Apparently we can expect the House of Wolves expansion to unlock on the 19th of May, which is a Tuesday, fitting in with the game's weekly reset and the launch of the first expansion, The Dark Below, back in December. The expansion's description reads: “The Queen's Fallen have purchased their freedom with Awoken blood. Hunt down the traitors and your debt to the Queen will be paid.” 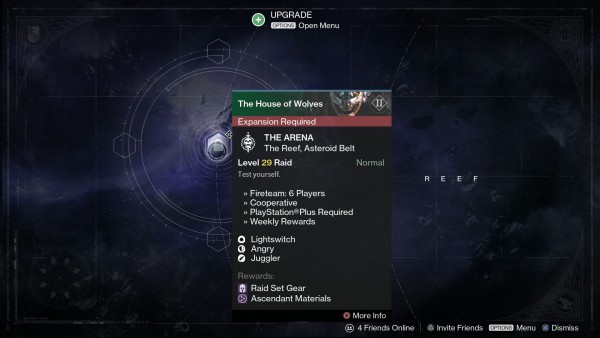 New story missions will make an appearance alongside a brand new raid. There will also be one new strike and three new multiplayer maps for the Crucible PvP mode. The leak confirms that this new raid will take place in ‘The Reef' a currently non-explorable area in the game. However, prior to launch, we did see game footage of The Reef being a playable area, which did not appear in the final game.

Following the leak on Reddit, Bungie community manager, ‘DeeJ', responded saying: “What could it all mean? I know that rampant speculation will burn for a while on this topic. As you enjoy a conversation about the pearls of information that can be lifted from this, please bear a few things in mind…”

“1. Aside from giving it a name, Bungie has yet to reveal the House of Wolves. That means that anything you know about it can change. We have a team working on the experience in their own fancy room, and they have some exciting surprises up their sleeves. 2. We reserve the right to overwrite anything you're looking at right now. These placeholder items enable us to save room on your drive for actual future updates. You'll all download them before it's time to play.”

“3. Any stats or assumptions about power or impact or handsomeness are months old, and do not reflect the things that we're doing to adapt to what you've taught us about Destiny. There is a process here, and you're a part of it. Leaks are fun. I totally get it. Please discuss to your heart's content. All we ask is that you leave your mind open to the evolution that are inevitable. What you see here are very old ghosts from our pre-launch database. These are not necessarily the wolves you're looking for.”

So there you have it, we have some early information on the House of Wolves expansion, although some details are subject to change between now and the May release date. Following on from the House of Wolves will be Destiny's biggest expansion yet in September, which leaked a little while ago.

You can read the full Reddit thread with all of the leaked details included, HERE.

KitGuru Says: From the sounds of it, the House of Wolves update will be a bit more substantial than The Dark Below. Bungie has yet to officially announce its future expansions but judging from the leaks, the developer is working on a lot for later this year.