Apple’s iPhone 7 is heading our way this September and while we normally see more of a major redesign with these generational leaps, it looks like the iPhone 7 might not differ from the iPhone 6 too much. According to a newly leaked image, the iPhone 7 will once again feature an aluminium body, with a new camera design and the removal of antenna lines running across the back of the device.

The image comes from a poster on Chinese site, Weibo (via 9to5Mac), and once again, it looks like the camera will protrude from the back of the iPhone 7, though it is positioned differently this time around. 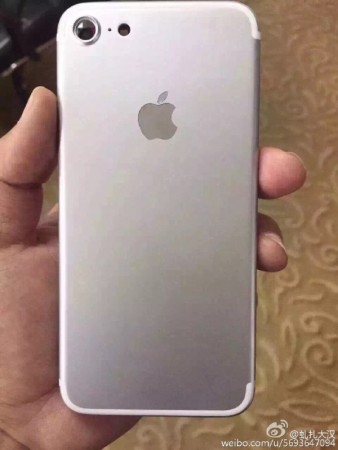 This appears to be the iPhone 7 and not the Plus model, which is said to come with a dual camera design on the back. The final key difference we can make from the back of the iPhone 7 is the newly placed antenna lines, which now merely go along the top and bottom edges of the phone, rather than along the back.

This particular image doesn’t confirm the lack of headphone jack on the iPhone 7 but at this point, all other leaks seem to indicate that Apple is heading in that direction. This once again points towards a more major design shift heading our way with next year’s iPhone, which is said to go back to an all-glass design like the iPhone 4.

KitGuru Says: I’m not a huge fan of the new antenna line design but I’m mostly just surprised at how similar Apple is keeping the iPhone 7 to the iPhone 6. Particularly given that the iPhone has had its first sales decline this generation.