Hp has entered the business-orientated Chromebook market by releasing two Enterprise mobile devices that support advanced security, management and deployment features. The new line-up consists of two machines which are Intel and AMD based.

The HP Chromebook 14A G5 will feature a 14-inch IPS BrightView display powered by AMD Radeon R5 graphics with an AMD A6-Series APU at its core. An entry-level version featuring an AMD A4-series APU with Radeon R4 graphics is also available, with both devices featuring 4GB DDR4-1866 memory and up to 64GB eMMC 5.0 internal storage capacity. 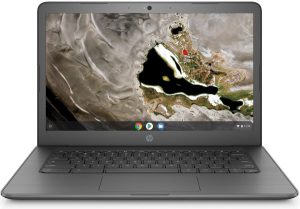 Additionally, Hp has launched an Intel based series of Chromebooks alongside the AMD variants. The HP Chromebook Enterprise x360 14E G1 is a premium business laptop featuring a metallic chassis, 14-inch display and powered by an Intel Pentium Gold 8th generation Core i7-8650 processor in the flagship model. Further specifications are available with Intel Core i5 and Core i3 series CPU’s.

The complete Chromebook Enterprise X360 14E G1 range will incorporate Intel UHD 610/620 graphics, up to 16GB DDR4-2133 memory and an eMMC 5.0 storage solution of up to 64GB capacity. In terms of connectivity, the X360 14E G1 will feature Wi-Fi 5, Bluetooth 4.2, a single USB 3.1 Gen 1 Type-A port, two USB 3.1 Gen 2 Type-C connections including DisplayPort and power delivery for docking. A microSD card reader and a 3.5mm connection will be included to connect audio devices. 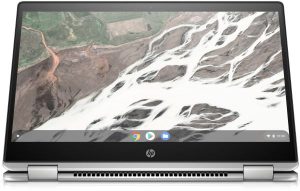 HP has released datasheets for the Chromebook 14A G5 and Chromebook Enterprise X360 14E G1 which can be found on the HP portal. HP says the new Chromebooks will be available later this month with pricing yet to be announced.

KitGuru says: We keep hearing of new mobile devices being announced by manufacturers recently, with many now offering AMD powered variants to provide consumers with an extended range to choose from. Do either of these new additions from HP grab your attention?