Microsoft Corp. on Tuesday introduced its all-new Surface 3 Pro tablet aimed at business users and enterprises. The slate is extremely thin and light, yet, it has a high-definition retina-class 12” display, is based on a high-performance x86 microprocessor and sports Windows 8 Pro operating system. Microsoft claims that the new Surface 3 Pro can easily replace a laptop.

When Microsoft originally released it Surface Pro tablets, it was criticized for small display, relatively high weight, thickness, limited multimedia capabilities and, of course, graphical user interface of Windows 8 Pro operating system. The new Surface 3 Pro fixes virtually all the issues the original device was condemned for. The new Surface 3 Pro is 0.36” thin (0.91cm, 30 per cent thinner than Apple MacBook Air 11”), it weighs 1.76 pounds (798 grams), it delivers up to nine hours of Web-browsing battery life, it has a 12” retina-class display, an improved operating system and a lot of other refinements.

But while the new slate is completely different from the previous-generation Surface Pro tablets, it still supports premium Surface Pen with pressure sensitivity that enables a more natural writing experience as well as improved Surface Pro Type Cover, which can transform Surface Pro 3 from tablet to laptop in a snap.

In fact, when coupled with additional optional accessories, including a new docking station for the Surface Pro 3 and a Surface Ethernet adapter, Surface Pro 3 has all the features and capabilities of a complete laptop, but in a thinner and lighter form-factor.

“So many people carry both a laptop and a tablet but really want just one device that serves all purposes,” said Panos Panay, corporate vice president of Microsoft Surface division. “Surface Pro 3 is the tablet that can replace your laptop – packing all the performance of a fully powered laptop into a thin, light and beautifully designed device. You’ll love being able to carry a single device for your next class, workday or weekend getaway knowing you have all the power you need.” 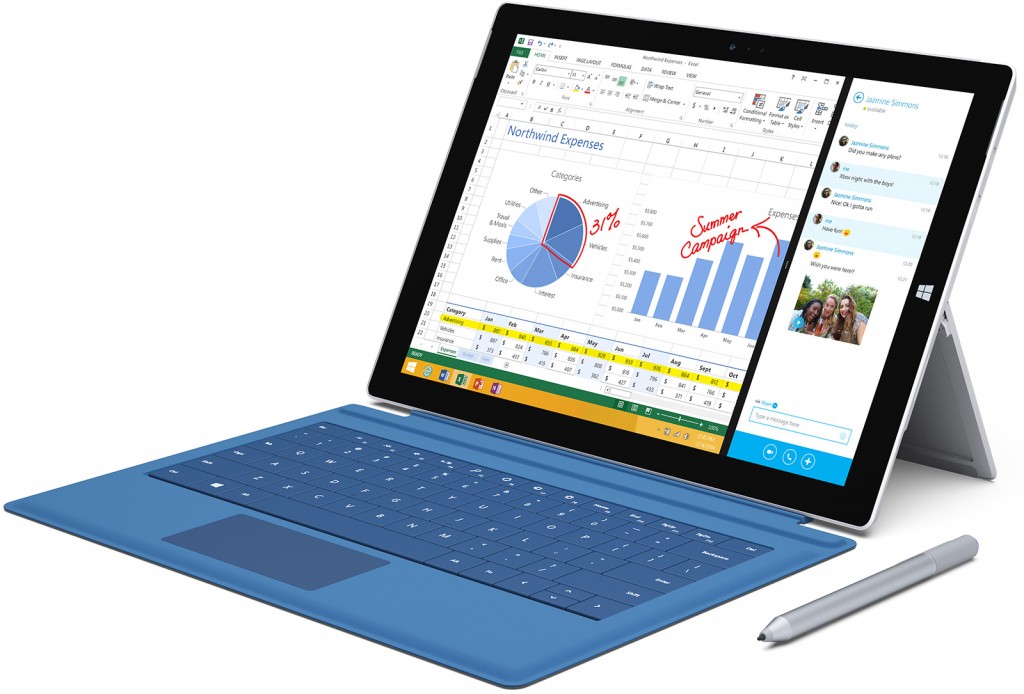 Microsoft Surface 3 Pro features 12” multi-touch display with 2160*1440 resolution and 3:2 aspect ratio, which should allow to comfortably use the device for both work and entertainment. The tablet is powered by dual-core Intel Core i5-4300U processor (1.6GHz frequency, maximum clock-rate with Turbo Boost is 2.90GHz, 3MB cache, 15W thermal design power) with Intel HD Graphics 4400 integrated graphics core, 4GB or 8GB of dual-channel LPDDR3 RAM, 64GB/128GB/256GB/512GB of solid-state storage and so on. Different configurations can be ordered, so it is easy to balance the price and performance, just like in case of a regular notebook.

The slate is equipped with 802.11ac/802.11 a/b/g/n Wi-Fi, Bluetooth 4.0, TPM 2.0 (trusted platform module for enterprise-class encryption), 5MP and 1080p HD front- and rear-facing cameras, built-in front- and rear-facing microphones, stereo speakers, mDP and USB 3.0 ports and so on. Although the slate is aimed at business users, it features ambient light sensor, accelerometer, gyroscope and magnetometer.

Surface Pro 3 will be offered in multiple configurations starting at an estimated retail price of $799. In the U.S. customers will be able to pre-order the new tablets at Microsoftstore.com starting from the 21st of May, 2014. The new slate will be available in the U.S. and Canada retail starting from the 20th of June.

KitGuru Says: Looks like the Surface 3 Pro is finally a business tablet from Microsoft that done right. It is rather light, it is thin and it is powerful enough to replace a notebook. It still lacks integrated 3G/4G/LTE support (which is a must-have feature for tablets), still, since in enterprise environments Wi-Fi is always available, it should not be a problem for the target customers.