Alongside the launch of Nvidia’s latest laptop GPUs, Intel is also unveiling the new 10th Gen Core H-series of processors for laptops. The new line-up features the first mobile processor to break the 5GHz barrier, which will help drive higher frame rates in games.

With the 10th Gen H-series of CPUs, Intel continues its mission to bring desktop class performance to laptops. At the top of the pile, you will find the Core i9-10980HK, a fully unlocked processor with 8 cores, 16 threads and up to a 5.3GHz single core turbo speed. The next step down is the Core i7-10875H, which features the same number of cores/threads but has a maximum single core turbo speed of 5.1GHz. 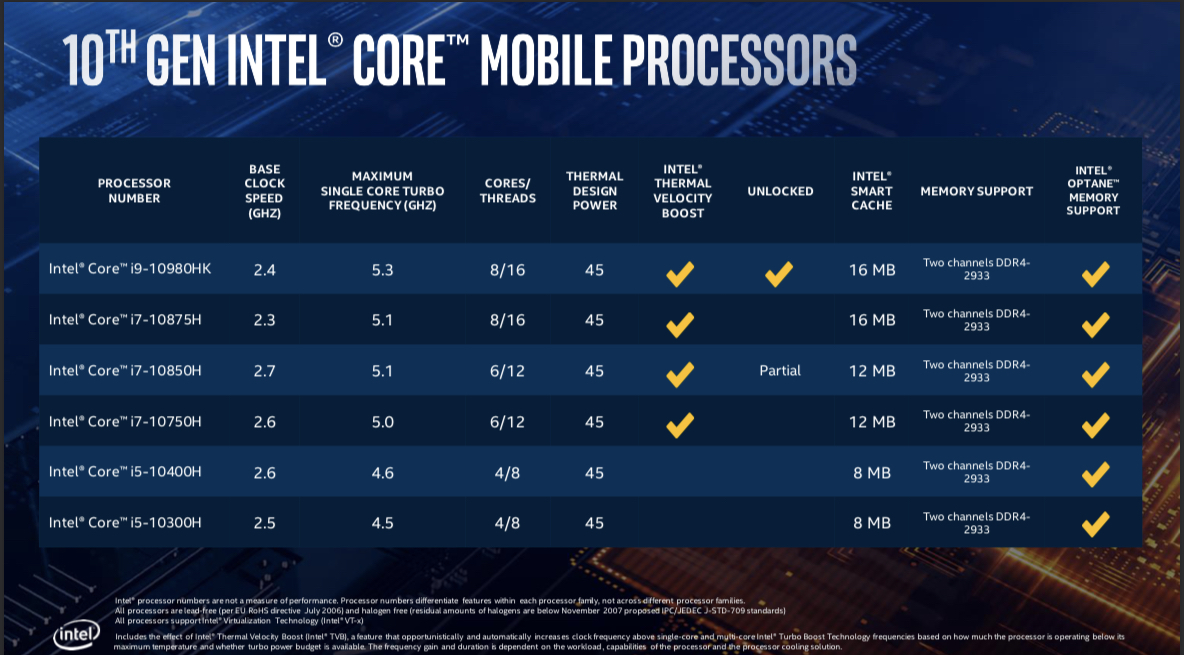 Further down the list, you will find two more 10th Gen Core i7 SKUs with 6C/12T and a 5.1 or 5.0 single core turbo speed. Finally, the H-series 10th Gen Core i5 processors will feature 4 cores and 8 threads, as well as much more tame 4.6GHz and 4.5GHz turbo speeds based on the SKU.

Up against a three year-old PC, Intel’s latest CPUs enable up to a 44% boost in gaming performance. There is also a notable performance bump for productivity too, with Intel’s own test data showing that an Intel 10th Gen Core i7 can export 4K video 70 percent faster.

We are already taking a look at a few laptops with this new hardware under the hood. In fact, you can already take a look at some of Leo’s thoughts in our new coverage of the the MSI G66 Stealth and the ASUS ROG Zephyrus Duo.

KitGuru Says: With Intel, Nvidia and AMD all launching new laptop hardware, we can expect to see another influx of gaming laptops over the next few months. What do you all think of Intel’s new 10th Gen laptop CPUs?