At Samsung Unpacked this evening, the Galaxy S20 line-up was officially unveiled. We’ve already heard quite a bit about this new trio of devices through leaks but now, we have official details on specs, features, pricing and release dates.

The standard Galaxy S20 will ship with a 6.2-inch QHD AMOLED display, up to 12GB of RAM, an Exynos 990 8-core processor (or Snapdragon 865 depending on region) and a triple-camera array on the rear. Specifically, the Galaxy S20’s camera setup consists of a main 12MP sensor, a 12MP ultrawide sensor and a 64MP telephoto lens that features 3x optical zoom. Internal storage starts at 128GB as standard and as usual, you can expand this with a microSD card. 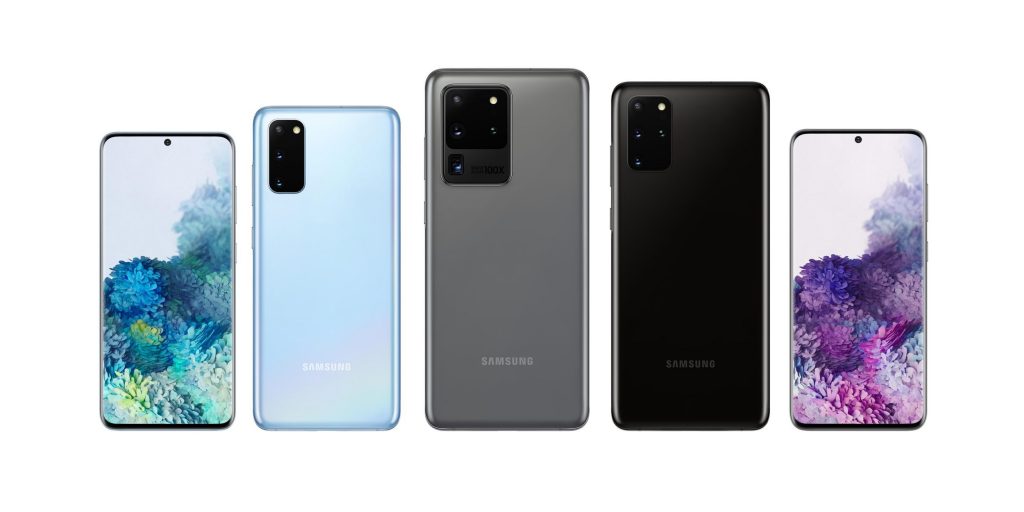 The Galaxy S20+ upgrades to a 6.7-inch QHD AMOLED display. Under the hood, you will find the same 7nm Exynos 990 SoC (or Snapdragon 865 depending on region) but the S20+ also boasts a 5G modem instead of 4G. The Galaxy S20+ also has a four-camera array, with upgraded wide angle and telephoto sensors, the latter of which features ‘Depth Vision’ for better depth of field. You can also opt for more internal storage with the S20+, with options up to 512GB.

Unlike past years, the ‘Plus’ model isn’t the top of the line. This year, Samsung is also debuting the Galaxy S20 Ultra, which has an even bigger 6.9-inch AMOLED display, which is also HDR10+ certified. The core processor remains the same but you still get 5G connectivity and up to 16GB of RAM for even more performance. The cameras are upgraded once again, with a 40MP front facing camera, a 48MP telephoto lens on the rear and a 108MP main camera sensor. There is a new zoom sensor too, with up to 100x zoom, while the S20 and S20+ only offer up to 30x ‘Super Resolution Zoom’.

While initial rumours suggested all three Galaxy S20 phones would have separate 4G and 5G variants, it looks like the S20+ and Ultra will only ship with 5G, while the standard S20 will be 4G. Pricing starts at £799 for the Galaxy S20, with the Galaxy S20+ sitting at £999 and the Galaxy S20 Ultra going for £1,199.

If you want the top-end Galaxy S20 Ultra with 512GB of storage, then that will set you back by £1,399. All three Galaxy S20 smartphones are already available for pre-order, with shipments set to begin in late February/early March.

KitGuru Says: The Galaxy S20 series is officially here and on paper, they all sound as impressive as we would expect. Prices are certainly trending higher though these days. What do you all think of Samsung’s new Galaxy S20 series? Are you thinking about upgrading yourself?