WhatsApp has been pulled from the Windows Phone Store

Whatsapp has been mysteriously taken off of the Windows Phone Store by the app developer as it is completely incompatible with the upcoming and long awaited Windows Phone 8.1 update. The incompatibility was discovered by the developers while beta testing a preview version of the app.

The developer has found that getting Whatsapp to run well or even at all on Windows Phone 8.1 can be a challenge, although the app runs perfectly fine on Windows Phone 8. Right now, users looking for Whatsapp will be greeted by this message: “We couldn’t find a match. Try a different spelling or search term.” 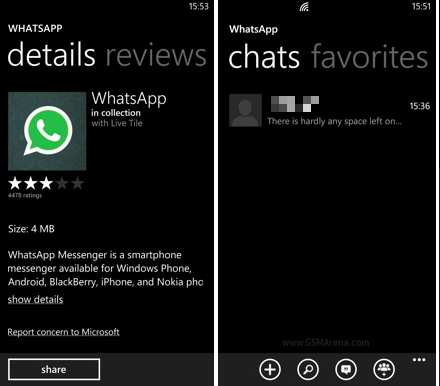 Windows Phone 8.1 is expected to launch in just over a month, a rumour that could hold true considering that Whatsapp had to be pulled from the whole store over an incompatibility with the unreleased update.

Whatsapp devs gave a rather uninformative statement to Windows Phone Central: “Unfortunately due to technical issues, we have chosen to un-publish WhatsApp Messenger on the Windows Phone platform. We are working closely with Microsoft to resolve the issues and hope to return to the store shortly. We apologize to our users for the temporary inconvenience.”

KitGuru Says: While it is bad news that one of the world’s most popular messaging apps has been pulled from the Windows store, the upside is that this is also a pretty strong indication that the 8.1 update will be coming to mobile devices very soon.