While the mobile market is often forgotten, it continues chug along as the single biggest video game sector. An example of this can be seen by none other than Genshin Impact, which has now officially made over $2 Billion within its first year – the kicker being that this was all just on mobile.

Genshin Impact is one of the biggest gacha games currently available. Having released on the 28th of September 2020, the game saw immediate success, making $100 million in its first two weeks. It seems this rapid rate of revenue did not slow down however, as on the game’s first anniversary, it has been revealed to have made over $2 Billion.

As reported by Kotaku, the free-to-play gacha game has made over $2 Billion on mobile in its first year, making it the 3rd highest grossing mobile game in the world currently. Breaking down these figures, 29% of this revenue comes from China, 24% from Japan and 21% from the USA. 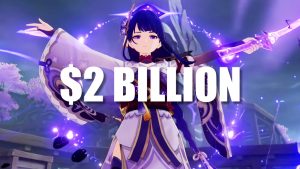 According to the analytics firm Newzoo, the mobile gaming market generated $80 Billion in 2020, compared to $45 Billion for consoles and $37 Billion for PC – and so it is no surprise to see a game such as Genshin Impact be so successful on the platform.

What this means for the future of both Genshin Impact and the market as a whole is unknown. While some have been spelling the end of console gaming ever since the first iPhone released in 2007, the markets have continued to survive and even thrive. There is certainly enough space in the industry for console and mobile gaming to co-exist, and while for many, mobile gaming is much more accessible, hopefully developers such as MiHoYo do not take the market’s success as an indicator to move entirely away from consoles and PC.

KitGuru says: What do you think of Genshin Impact? What platform did you play it on? Will mobile and console/PC gaming always co-exist? Let us know down below.