CrystalDiskMark is a useful benchmark to measure theoretical performance levels of hard drives and SSD’s. We are using V6.0.0 x64. 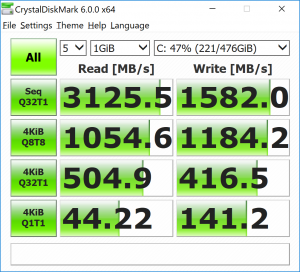 The 512GB Samsung PM961 M.2 NVMe SSD is a drive we have seen used in desktops, and the performance shows that you are getting exactly the same performance as a desktop, with hugely quick reading at 3,125.5MB/sec and fast writing at 1,582MB/sec. 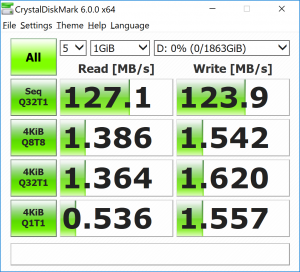 The 2TB Seagate Mobile HDD may have the same kind of capacity as we see in desktop workstations, but it’s nowhere near as fast, primarily thanks to its 5,400rpm rotational speed. With desktop HDDs hitting close to twice the reading speed of 127.1MB/sec and writing of 123.9MB/sec, you are losing a fair bit of throughput by going mobile.