MSI overhauls its laptop lineup with Pascal and new cooling

This week, we were invited back to Taipei for MSI’s latest launch event during which the company unveiled a whole load of new laptops, ranging from beasts like the GT83VR Titan SLI, which features dual GTX 1080s, all the way down to some more sensible GTX 1070 and GTX 1060 options. There was certainly a lot of ground to cover, but we have rounded up the important details.

We have already been given the run down on Pascal graphics for laptops during Nvidia’s own event. You can catch up on those details, HERE. However, in this piece, we will be going over what MSI brings to the table in its effort to ‘shatter the desktop performance cliche’, which is more or less the company’s way of saying: ‘Think you need a desktop PC? Nah, a laptop could do nicely.’

Many of the features on show for MSI’s new laptops are familiar to the last generation, which seems fair as we don’t really need to overhaul a SteelSeries keyboard, Super RAID 4 or Nahimic Audio each year. However, these Pascal GPUs are not too far off their desktop counterparts and that power needs to be controlled with new cooling solutions. 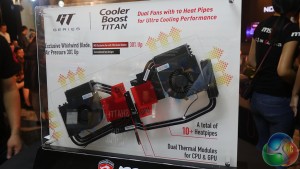 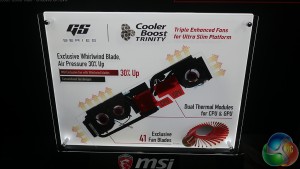 MSI began showing off its new ‘Cooler Boost Trinity’ and ‘Cooler Boost Titan’ technology this week. The former is an all-new three-fan cooler, while the latter is designed to cater to dual-GPU laptop systems. Both new coolers also need to be able to tame the heat of an M.2 SSD, which can get toasty and experience performance fluctuations if not controlled properly.

It looks like MSI is off to a great start putting its range together as well. The company manufacturers its laptops inside its own plants, rather than outsourcing, giving them greater control over production. On top of that, Joseph Hsu, President of MSI, told KitGuru that they were ‘first in line for supplies from Nvidia’ and experienced ‘no supply chain problems’ so there shouldn’t be any long droughts in availability. 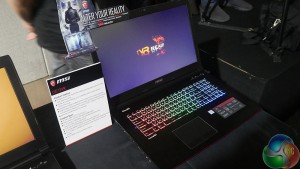 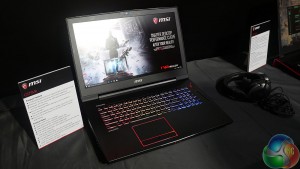 One of the big features MSI is keen to push this generation is the inclusion of 120Hz and even 5ms near-IPS panels. We are waiting on clarification about exactly what ‘near-IPS’ means and are betting the KitGuru tenner on some variant of VA technology. These beefy 10-series GPUs should pair up nicely with a high refresh rate display and near-IPS will attract many who value colour accuracy over response times.

Due to the usual restraints you would expect from a laptop, overclocking functionality is limited to the GT series, which comes with beefier cooling. The fastest models in this range will have an additional preset to boost GPU clock speeds up to 350MHz over stock, which is substantially more.

KitGuru Says: We will be kicking off our MSI laptop reviews with the GT62VR very soon, so keep an eye out for that. It seems that MSI has pulled out the stops this generation, delivering new laptops that could truly replace a desktop in terms of both performance and portability. 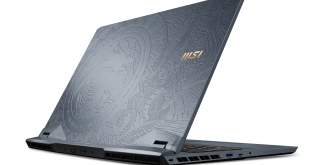