MicroSD cards are somewhat of a marvel when it comes to how much storage you can cram into the tiny fingernail-sized card. PNY is taking portable storage to a new level with the world’s first 512GB MicroSD card- the PNY Elite.

Back in February, SanDisk took the crown for the world’s highest capacity MicroSD card, with an impressive 400GB.  Just three months later, PNY has topped that with 512GB. This amount of storage equates to around 80 hours of Full HD videos or 100,000 pictures, 18MP in size. Speed wise, it meets the Class 10 and U1 classifications but doesn’t measure up to A1 certification. 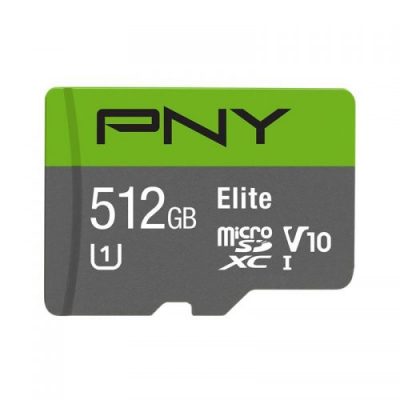 PNY says the Elite can handle 90MB/s, which is poor when compared to the SanDisk 400GB MicroSD card that can perform at 160MB/s. This means you must trade off storage for speed, perhaps gearing it more towards use in cameras.

The PNY Elite 512GB doesn’t have a release date yet, but it will be $350 when it launches. Expect to hear more next week when Computex kicks off.

KitGuru Says: The increasing size of MicroSD cards never ceases to amaze me, but I can’t help but feel that performance should be more of a focus for the cards right now. What do you think?