Samsung has announced it is launching a special edition Star Wars-themed Galaxy Note10+. The new device will coincide with the release of the new Star Wars: The Rise of Skywalker film, which is due to hit the screens on 20th December.

Star Wars: The Rise of Skywalker is set to be the final instalment of the Skywalker saga and to commemorate this event, Samsung has launched a special edition Galaxy Note10+ featuring a Star Wars-inspired design, along with digital content. Samsung says the collaboration will unite two Galaxies – a galaxy far, far away, and the Samsung Galaxy.

The Star Wars edition Galaxy Note10+ will be bundled with a special case, a metal collector’s item badge, an S Pen and Galaxy Buds. Also included in the bundle will be exclusive Star Wars-themed content such as wallpapers, shutdown animations, icons and sounds for fans of the Star Wars franchise to enjoy. 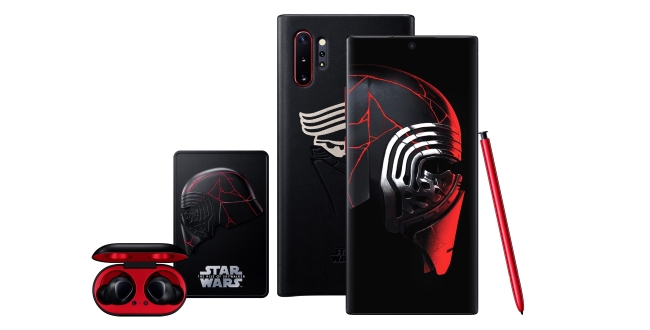 Users heading over to the official Samsung website will have noticed the special edition Galaxy Note10+ has been available to order since 10th December, while inside selected Samsung Experience stores, Lucasfilm and Samsung have collaborated to bring the two Galaxies together by engaging with Star Wars fans in store.

Star Wars fans hoping to check out the Samsung and Lucasfilm collaboration in-store can do so at the Samsung Experience stores in Oxford Street, London, Westfield Stratford City, London and Manchester Trafford stores. For more details about the Star Wars Special Edition Galaxy Note10+, check out the official Samsung product page.

KitGuru says: Any Star Wars fans out there excited about this collaboration between Samsung and Lucasfilm? Will you be picking up one of these special edition Galaxy Note10+ devices?