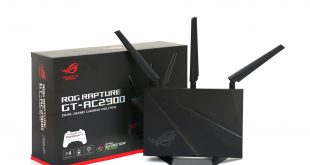 Networking for games is about more than just raw throughput. You also want the lowest latency possible, as well as the ability to prioritise gaming traffic over other applications that make use of the network. As a result we have seen a number of gaming-focused broadband routers hit the market over the last few years. Latest to arrive on the testing bench is the ASUS ROG Rapture GT-AC2900. Alongside a raft of features, its gaming cred is ratified by being an ‘NVIDIA GeForce Now Recommended Router'.

The underlying hardware is dual-band and ASUS claims AC2900 performance. This is made up of up to 750Mbits/sec of 2.4GHz performance plus 2,167Mbits/sec at 5GHz. But this is thanks to support for 1,024QAM, which requires client devices supporting this as well. So normally the maximum bandwidth will be 450Mbits/sec and 1,733Mbits/sec respectively. The GT-AC2900 has three external antennas that are used both for 2.4GHz and 5GHz, with a single internal antenna for additional 5GHz support.

This router also support's ASUS's AiMesh technology, so it can form part of a mesh network with other ASUS devices supporting this system, although this works better when tri-band devices are used. There are security features from Trend Micro built in, including a lifetime subscript to AiProtection Pro, which uses regularly updated signatures to detect and provide protection against external attacks. The GT-AC2900 is also endowed with ASUS Aura Lighting, so you can set your router to have a technicolour light scheme to go with your other ASUS ROG devices that also have Aura compatibility. 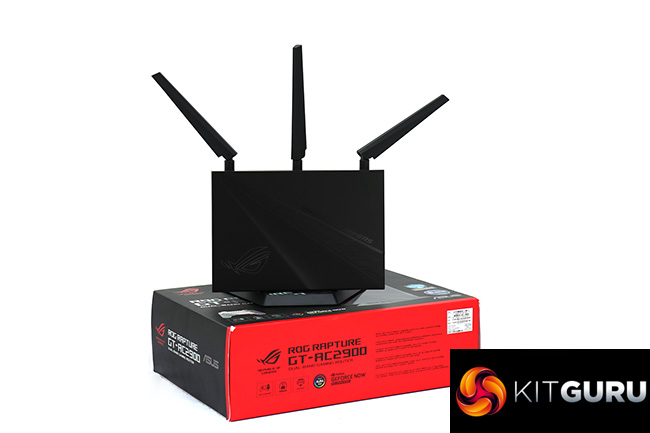 The GT-AC2900 is intended to sit upright on a stand, rather than flat, with the antennas sticking out the top. The ports are therefore along the bottom of the rear, including four LAN, WAN, and two USB. The underlying hardware is fairly meaty. The device is based around a 1.8GHz dual-core processor, with 256MB of Flash ROM and 512MB of RAM. There's extensive VPN support, and you can use the USB ports for print, storage and media serving.

For under £250, the GT-AC2900 is a promising proposition for the serious gamer looking to upgrade their router so it's more focused for their everyday entertainment activities. It's around the same price as the NETGEAR Nighthawk Pro Gaming XR500, so let's find out how it compares.