Heading to the router’s IP address for the first time with a Web browser invites you to go through the setup wizard. Aside from setting up the SSIDs and passwords for the 2.4GHz and 5GHz WiFi radios (or keeping them the same), you’re invited to set the function of the Boost key on the side of the device. Then you set the admin username and password, before being prompted to upgrade to the latest firmware (assuming you have a working Internet connection). Finally, it’s time to login to the administration backend. 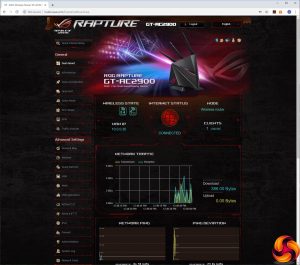 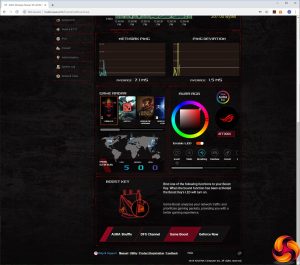 As we have come to expect from ASUS routers, the administration interface is absolutely packed with features. The overall look is a little more exciting than regular ASUS routers thanks to liberal usage of colourful imagery. But it’s still a huge list of options, and the appearance is much more busy than the DumaOS used by NETGEAR’s gaming routers.

Nevertheless, the range of features is equal or possibly even greater than the NETGEAR Nighthawk Pro Gaming XR700 or XR500. The initial admin screen displays status information, and if you scroll down you can use the Game Radar function to look at ping status for various global game servers, adjust the configuration of the router’s Aura RGB lighting, and change the function of the Boost button.

One of the options for this button is GeForce Now, NVIDIA’s technology for streaming games from your accounts on Steam, Uplay and others to any device, even one with quite puny hardware. However, for PC users the service is still in beta and there’s a lengthy waiting list to get on the trial. The GT-AC2900 doesn’t act as a GeForce Now client, but it will prioritise the remote traffic so it will run more smoothly on your home network. 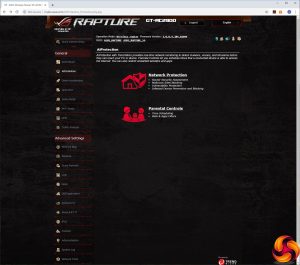 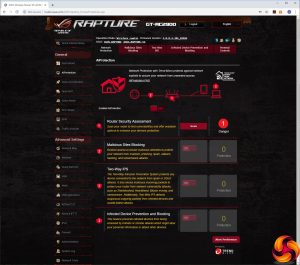 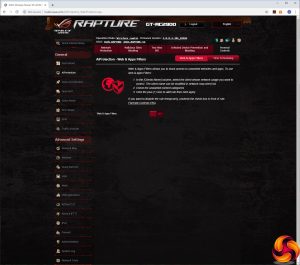 The next option on the General list is AiProtection. This includes Network Protection and Parental Controls. The former includes a useful vulnerability scan, the ability to block known malicious websites, two-way Intrusion Protection, and blocking of devices that have been enslaved by botnets or turned into zombies. The Parental Controls let you block adult content, Instant Messaging, P2P file transfer, and media streaming for individual clients by MAC address. You can also set up times when specific devices can use the Internet. 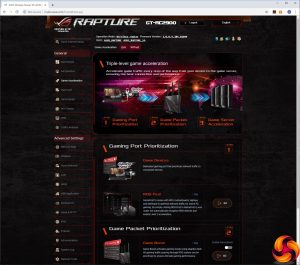 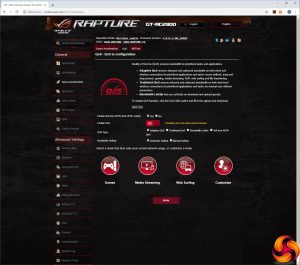 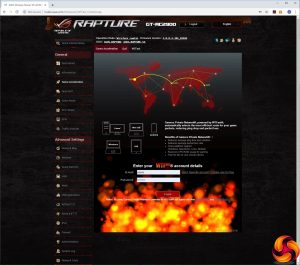 Game Port Prioritization is actually about you owning other ASUS ROG devices with GameFirst V, which allows the router to automatically detect them and prioritise their game traffic. Game Packet Prioritization is a more mainstream Quality of Service (QoS) system that provides four mode options for different usages – Games, Media Streaming, Web Surfing and your own Custom setting. The latter lets you choose which traffic gets the highest priority and which the least.

Finally, Game Server Acceleration is supplied by WTFast. This is a service that connects your home network to your game’s server via the route with the lowest latency and ping time. You need an account to set this up, but it’s free. Normally, you’d pay $9.99 a month for this service so it’s a valuable inclusion with the GT-AC2900. 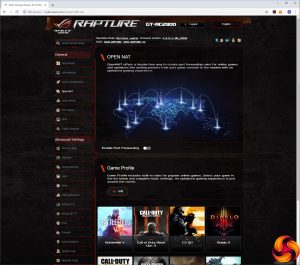 The Open NAT section will be another useful one for the intended gamer audience. This is essentially port forwarding, but ASUS has designed the interface very nicely, allowing you to scroll through a graphical list of current games, choose the one you want, and associate the built-in rules with a client system on your network. It’s very easy to use. 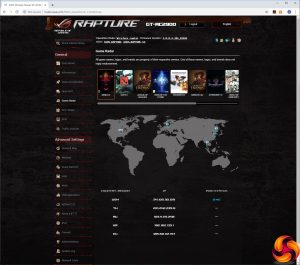 The Game Radar has a similar list of currently popular games, allowing you to look at the pings of various servers so you can choose the best one to game on.

The WiFi Radar may have a similar name, but its function is completely different. Clicking on any of the four options opens a completely different interface where you can scan the spectrum for other routers, although at first we thought this didn’t seem to pick anything up in our test environment, when in fact there were loads of other routers in the vicinity.

You can view the statistics of the current channels used by your router, troubleshoot issues, and configure how data is collected. It all looks very useful to optimise your WiFi, but the one thing that isn’t obvious is that you need to hit “Start Data Collection” before it shows any information. 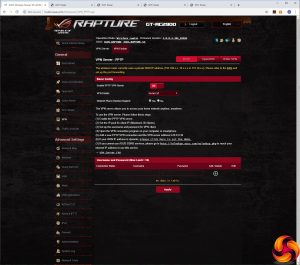 If you thought this router was just about games, think again. You still get ASUS’s comprehensive VPN support, where the router can act as a VPN server via PPTP, OpenVPN or IPSec. You can even connect to multiple VPN servers at once via the VPN Fusion option. 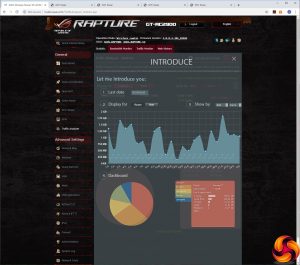 The Traffic Analyzer lets you monitor bandwidth usage and traffic, as well as revealing which websites have been visited – although you need to turn the latter on before it starts capturing URLs. 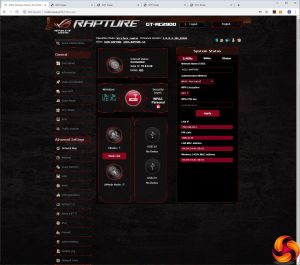 The Advanced Settings section is like a whole new interface, and starts off with its own overview in the Network Map section. You can also alter SSIDs and passwords here. 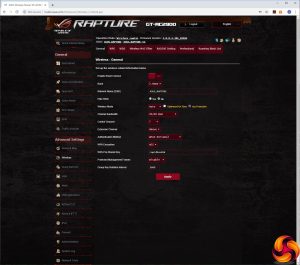 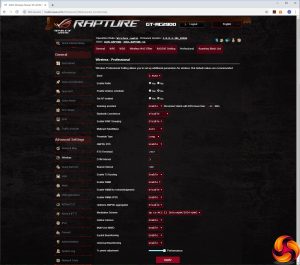 The Wireless section offers a massive range of options, from setting the shared key, to WPS and configuring the router as a WDS bridge. You can filter wireless devices by MAC address, and even set up parameters for authorising clients through a corporate RADIUS server – something we think will be unlikely for most gamers. The Roaming Block List is for use with ASUS’s AiMesh, and prevents devices from moving between router nodes.

The Professional section lets you configure a huge range of granular WiFi options like RTS Threshold or Beacon Interval. We suspect most users will never touch these at all during everyday use, but it’s nice to know you could if you wanted to. 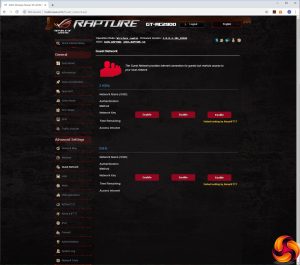 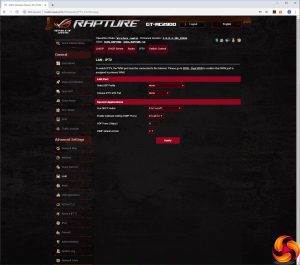 You can set up a guest WiFi network, and the LAN section lets you set up the router IP, DHCP server range and switch control options including Jumbo Frame and Link aggregation for the LAN 1 and 2 ports. There’s even the option to provide specialised support for an IPTV STB over one of the LAN ports, or two if necessary. 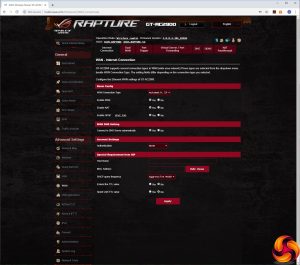 Under WAN, you can set up how the broadband connection is configured, but also set up Dual WAN where either another LAN port or a USB connection is used for Fail Over or Load Balancing. You can enable port triggering and port forwarding, nominate a DMZ, and set up DDNS through a wide variety of services including ASUS’s own and the usual favourites like DynDNS and No-IP. Finally, you can enable NAT passthrough for your VPN connections. 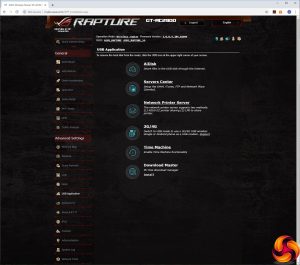 The USB Application section gives you lots of options for how the USB ports are used, from AiDisk network storage, UPnP media servers and FTP, networking printing, 3G or 4G USB mobile data dongle, Apple Time Machine backup and a download interface for leaving the router to manage your P2P downloads directly, without a PC. 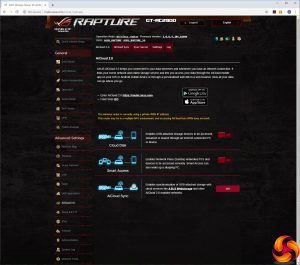 The GT-AC2900 supports ASUS’s AiCloud 2.0, allowing you to get onto your local router-attached storage and PC servers via a remote link to access the files, and also synchronise USB storage to ASUS’s online Webstorage. 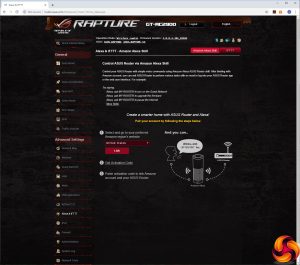 There’s support for Alexa and IFTTT, so you can use voice commands set up as Alexa skills or conditions you set via IFTTT’s service to trigger router behaviours. 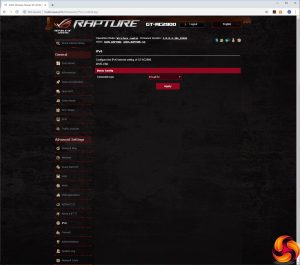 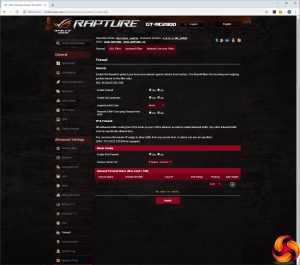 You can enable support for a wide variety of IPv6 Internet connections, and configure the built-in firewall with URL, keyword and network services filters. However, you don’t get templates for common URLs and keywords, and the network services suggested just include WWW, Telnet and FTP. 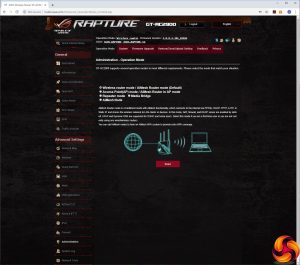 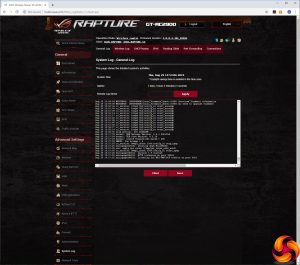 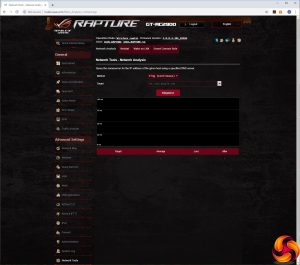 Finally, the Administration section lets you choose between router, AP, repeater, media bridge and AiMesh node modes. You can configure various system settings, upgrade the firmware and restore, save or upload the router settings. The logging system includes General, Wireless, DHCP, IPv6, routing table, port forwarding and connections sections. Network tools include ping, traceroute, netstat, Wake on LAN options, and the ability to set up Smart Connect Rules. The latter is likely to scare most users into quickly selecting another section.

Overall, the GT-AC2900 has a huge backend packed with features. If there’s anything missing let us know, because we couldn’t spot anything. The core router settings are comprehensive, and the gaming options that have been added are full of abilities too.