CES: ASUS unveil ROG Strix Flare, a keyboard that can light up your team’s logo

ASUS might not be the first brand buyers look towards for gaming keyboards, but the company has made an impressive effort over the past few years to establish it among the heavy hitters. Now, in an attempt to appeal to the e-sports scene, ASUS has kicked 2018 off by unveiling its Strix Flare keyboard under the Republic of Gamers banner.

Media keys are often a set standard in higher end keyboards, with the incredibly well received, yet expensive ROG Claymore utilising a volume wheel on its detachable numpad. The ROG Strix Flare brings this feature along with other media keys to a more accessible level, yet in a different way to what gamers are accustomed to. 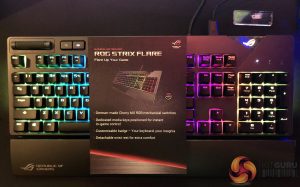 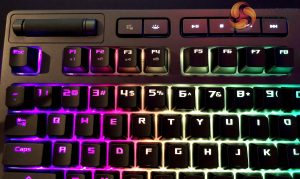 The volume wheel now occupies the top left hand side instead of the top right, “near the position that a gamer’s left would occupy during a melee,” explains ASUS Product Manager for RGB peripherals, Nephel Luo when talking with KitGuru. “Which means that your fingers hardly need to move in order to make adjustments.”

The ROG Strix Flare sports Cherry MX Blue keys as standard, but will eventually offer Red and Brown options too. The keyboard makes good use of ASUS’ signature Aura Sync RGB lighting, with a unique function embedded in the top right corner of the device. 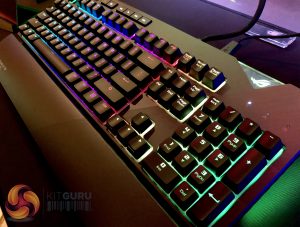 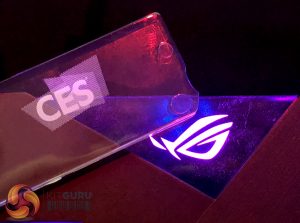 “The top right of the keyboard will be of interest to teams,” continues Luo. “There is a replaceable, transparent plastic insert that can be customised with your clan’s name/logo. When you ‘plug it in’ to the keyboard, it glows in sync with your Aura RGB settings.”

The ROG Strix Flare is complete with a removable wrist rest and is expected to hit the market in Q2 2018 in the region of £140.

KitGuru Says: I’ve been interested in getting a hold of the ROG Claymore since before it released, so it will be interesting to see how the ROG Strix Flare stacks up against it, especially when it is speculated to be much more affordable overall. What do you think of ASUS’ new keyboard?

Previous Activision drops another trailer for the next zombies chapter in Call of Duty: WWII
Next CES: Vertagear’s PL4500 is the first wireless RGB gaming chair 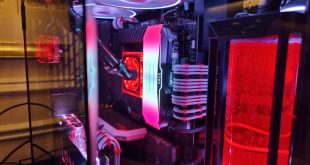