To test the ROG Claymore, I used it as my daily driver for over a week. I used it for gaming as well as typing reviews and other office-related tasks.

First, let’s take a look at the ROG Armoury software that works with the Claymore keyboard. 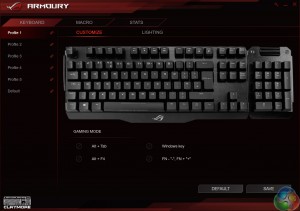 On the first page, users can change the default key assignment, as well as enable or disable certain shortcuts (such as Alt+F4) that could be annoying if they were accidentally triggered in-game.

Users can also choose between 1 of 5 profiles to customise here, thanks to the tabs on the left-hand side of the page. Incidentally, these profiles are also saved to the Claymore’s internal memory – meaning your settings are stored directly to the keyboard, negating the need for the software should you change which system the keyboard is plugged in to. 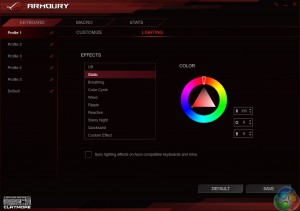 Next is the lighting page. Here, there are a number of preset effects for you to choose from, including ‘wave’, ‘colour cycle’ and ‘ripple’ to name just three. Users can even create their own custom effects – or, if you are like me, pick one colour and leave it as a static backlight.

When it comes to lighting, users can also sync up the Claymore’s lighting effects with a compatible ROG mouse, using the ROG Sync technology. At the moment, the only compatible mouse is the ROG Spatha which we reviewed over HERE. Still, this is very cool as you can have both your peripherals cycling through the RGB spectrum together, perfectly in-sync. 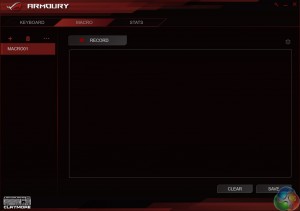 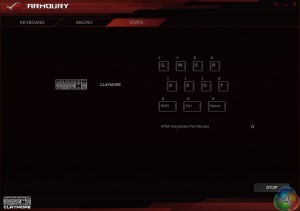 Moving on, there is also a dedicated page for your macros – allowing you to record and manage your macros as you desire.

Lastly, there is actually a ‘stats’ page. This tracks how many times you use certain keys, and can also let you know how many keystrokes-per-minute you actuate. This may not hugely useful but it is definitely interesting to see how many times you hit the WASD keys during a gaming session, for example.

Overall, then, the software is quite good. There is control over all the important things (lighting, macros, button assignment etc) so I cannot really complain, but I would like to see a few more options in the lighting control section. For example, I would love to change the speed of the some of the effects, as well as change the direction in which the keys light up. ASUS do tell us that the lighting effects are being constantly updated, though – so hopefully we will see a bit more granularity baked-in over time. 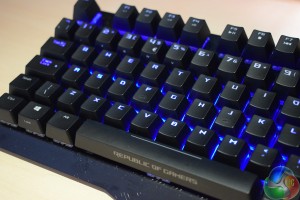 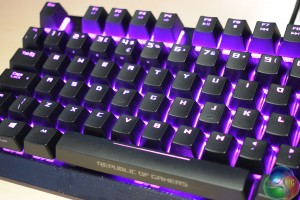 Before moving on, it is also worth mentioning that the keyboard’s RGB functionality is great. The colours are very accurate and punchy, while there is also strong coverage across the keycaps.

Anyway, on to the physical testing of the keyboard. Given that ASUS have billed the Claymore as the world’s first mechanical RGB keyboard with a detachable numpad, it is probably best I mention that first. It is certainly an innovative idea – I particularly like that you can attach the numpad on the left and right sides of the keyboard. This makes it very versatile – on the right-hand side it can be used as a conventional numpad, but putting it on the left-hand side makes it ideal for use as a macro keypad. The numpad is also exceptionally easy to attach, while there are also some rubber coverings for the gold contact points to ensure that these contact points stay dust-free.

The build quality of the Claymore is also fantastic due to the aluminium construction. This makes the keyboard a joy to use on a day-to-day basis for a number of reasons. Firstly, the keyboard has some real weight to it – it weighs 943g including the cable. This just makes it feel durable and sturdy. Secondly, the weight, along with the rubber feet, prevent absolutely any slipping. I was deliberately hammering away very aggressively to try and make the keyboard budge – but unless you actually push it away, it did not move at all during my relentless assault. Lastly, the Mayan-inspired design on the keyboards just looks really cool – it makes the keyboard pleasing to look at, instead of just being a boring slab of metal.

For £199.99 we would expect the absolute best mechanical switches, too – and we definitely get that in the Cherry MX switches. There is a choice of Brown, Red, Black and Blue switches so all the bases are covered as well. Incidentally, we recently ran a poll on Twitter asking your favourite switch type, and MX Red and Brown switches were the most popular by a distance. My favourite is actually the MX Blue switch, as I find the tactile feedback, along with the click, great for typing. Reds are generally considered the best for gaming, though, due to its lesser, 40g actuation force requirement.

Speaking of gaming, the Claymore has a lot of features that will please the gaming audience. There is a Windows lock function as well as N-key rollover (NKRO), while macros can also be recorded on-the-fly. Incidentally, on-the-fly macro recording is also very simple: press the Fn+Alt keys to start the recording, press the keys again to end the recording, and then choose which key you want the macro to be assigned to.

Furthermore, if you have an ASUS ROG motherboard as well, you can also access some very cool bonus functionality offered by the Claymore. Essentially, the Claymore can interface directly with your ROG motherboard to control things like fan-speed, and it can even allow you to overclock your CPU and memory directly from the keyboard. Sadly I do not have a ROG motherboard so I could not test these functions, but enthusiasts would be very appreciative of these features I am sure. After all, how much time could you save by overclocking your CPU directly from the keyboard?

Lastly, it also worth mentioning that the Claymore still manages to fit the necessary multimedia keys (volume control, play/pause functionality) onto its small frame – they do share space with the F-keys but this is much better than losing the functionality entirely.