CES 2020 has seen plenty of new mechanical gaming keyboards being launched and today Cherry, who supply the key switches for many of these new keyboards has announced an update to its MX mechanical key switch line.

Since its introduction in 1983, Cherry has been constantly developing and optimising its MX switches. In an announcement today, Cherry claims its latest MX switch improvements focus on durability, which means this generation of MX switches is capable of achieving over 100 million actuations, without suffering from quality or performance degradation.

Thanks to its experienced development team based in Germany, Cherry has been able to increase the gliding surface area on the key switch stem as well as include eight guide rails on the inside of the switch housing, this results in a wobble-free operation for increased durability. Cherry has named this new design “Hyperglide”, which doubles the number of guaranteed actuations an MX switch is capable of in its lifespan. 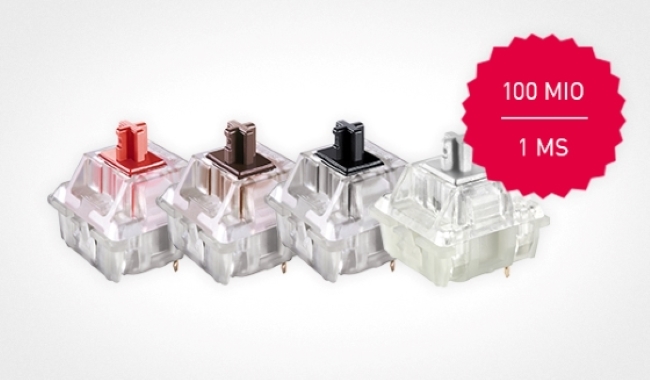 Cherry MX Red, Black, Brown and Speed Silver switches all feature this new update which allows more than 100 million keystrokes without loss of quality, compared to the 50 million of the previous generation. The new design has been extensively tested in the company’s laboratory to verify these performance figures.

In addition to the stem upgrade, Cherry’s Gold Crosspoint technology has been reworked too. A new modification includes an update to the bending radius of the contact to optimise bending force. Since 1st November 2019, all MX switches have been manufactured using advanced machinery that refines the production process and has resulted in a significant reduction in switch bounce time of less than one millisecond.

KitGuru says: If you are thinking of purchasing a new mechanical keyboard with Cherry MX switches soon, check the packaging to see if they keyboard features these updated switches. Package labelling should indicate if the switch lifespan is guaranteed for 100 million operations and less than one millisecond bounce time.