At the Computex 2014 trade-show this week Advanced Micro Devices demonstrated the industry’s first prototype of a monitor that features the company’s FreeSync technology, which is largely based on the recently announced Adaptive Sync technology from VESA. While the monitor works pretty fine, it seems that it has certain limitations, which may not be a problem for now as the first commercial FreeSync displays are only expected to emerge in 2015.

Just like Nvidia Corp.’s G-Sync as well as VESA’s Adaptive Sync technologies, AMD’s FreeSync enables the display to dynamically match a GPU’s rendering rate, on a frame-by-frame basis, to produce a smoother, low latency, gaming or movie watching experience. The Adaptive-Sync has been a standard component of VESA’s embedded DisplayPort (eDP) spec since 2009 and so far has been used primarily to reduce power consumption of notebook displays by decreasing their refresh rates. As a result, many building blocks of monitors as well as graphics processing units already support the Adaptive Sync.

Recently the Adaptive Sync technology was incorporated into the DisplayPort 1.2a specification, so eventually it will be supported rather widely by various high-end displays.

The FreeSync-capable display that AMD demonstrated at the Computex 2014 was based on a retail monitor with 2560*1440 resolution that was hardware-capable to support the tech and could be converted with updated firmware, according to AnandTech. The prototype reportedly operated with a rather narrow range of rates of just 40Hz to 60Hz, which is not bad for a prototype, but may not be good enough for a technology that is due to be released commercially six months from now. AMD ran its fan-blade demo to show off the advantages of the FreeSync. 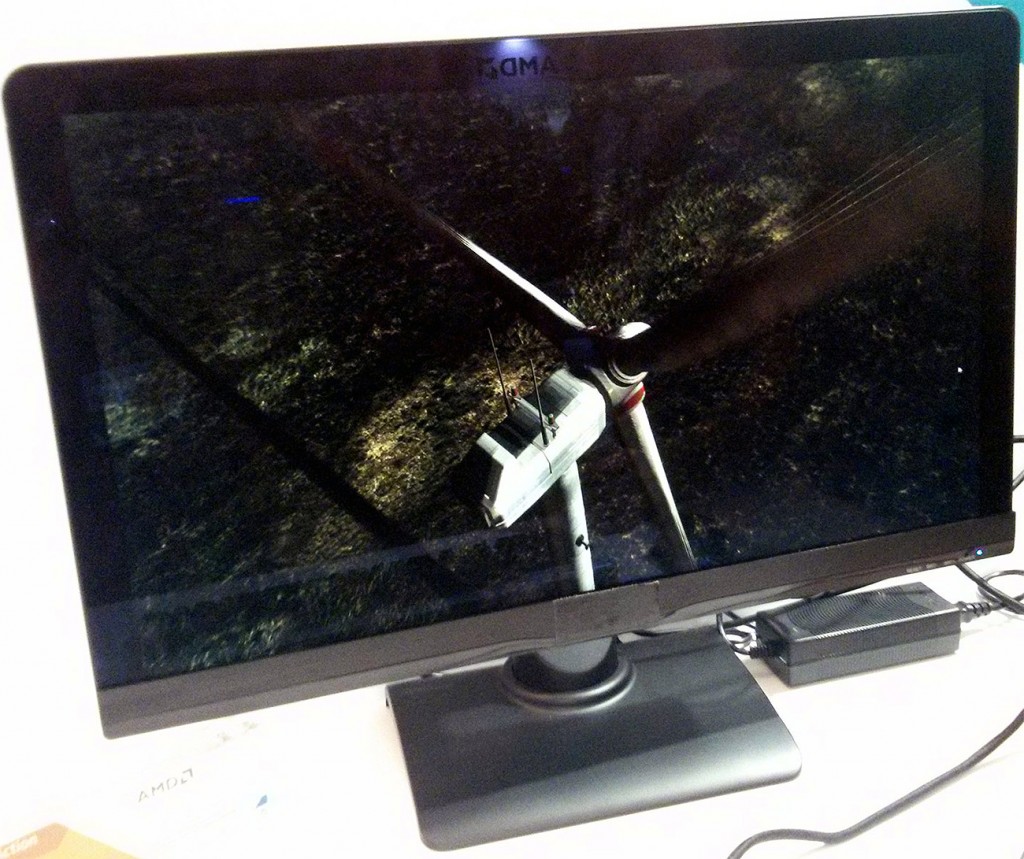 The prototype display that supports the FreeSync technology. Image by PCPerspective.

The demonstration was meant to show that existing hardware – panels, scalers, GPUs, etc. – already supports variable refresh. Accordingly, it should not be too expensive for manufacturers of monitors to add support of the FreeSync to their products. However, it should be noted that the FreeSync will only be supported by the Radeon R9 290/290X/295X2 and the Radeon R7 260/260X graphics cards based on the Hawaii and the Bonaire graphics processing units, respectively, according to PCPerspective.

AMD expects retail prototypes of monitors with the FreeSync technology to show up around September, which means that in the best case scenario such displays will be available before the end of the year. However, mass availability of FreeSync-enabled monitors will probably occur only in 2015.

KitGuru Says: Since the FreeSync is largely based on the VESA’s industry-standard Adaptive-Sync technology, it is unclear why AMD and display makers want to commercialize the FreeSync instead of the Adaptive-Sync first. The latter will be supported by AMD, Nvidia and Intel, whereas the FreeSync is essentially another proprietary technology. In the end, the industry will run into a situation when there are three competing adaptive refresh standards, which will be very confusing for the consumer.