OcUK kicks off special weekend with 4K monitors from £539

If you think that 4K image quality is something that you’d love to have, but you don’t have the heart to get a second mortgage, then Overclockers’ weekend special could be just what your inner gamer/designer ordered. KitGuru stands amazed. Can you really get a 4K monitor for £539?

It happens with every generation of new technology, so we should be used to it.

We should expect technology to hit a tipping point and wait for the prices to plummet.

Still, when the price drop comes, it’s a little shocking.

First up is the Dell P2815Q which is a 28″, widescreen monitor that offers you the 3840×2160 version of 4K. As well as the standard inputs, it also incorporates a USB 3.0 hub for just £539. Screen refresh is fixed to a maximum of 30Hz when running at 4K, so this screen would be better for design.

Next is the Dell UltraSharp UP2414Q, which is a 24″ monitor that has the same resolution, but is able to support 60Hz with DisplayPort. As well as multiple USB and media card inputs, this £899 screen also has multiple screen connectivity options.

Last, but by no means least, Overclockers is offering the KitGuru Monitor of the Year 2013, the Asus PQ321QE for £2,399.  Just to give you a little perspective, if you bought one of these screens at the start of January, you would have needed £600 more! 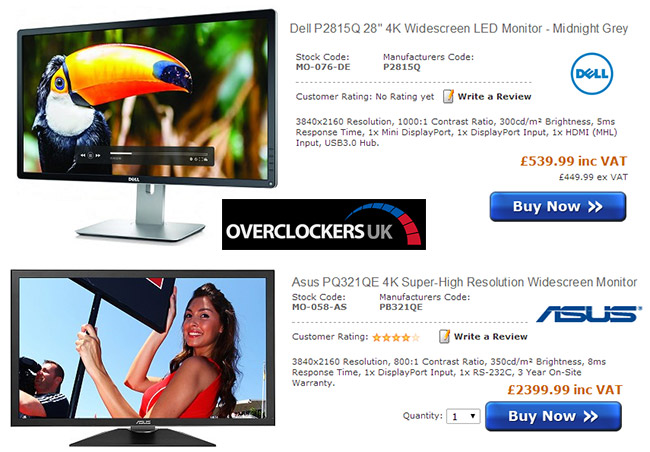 .
KitGuru says: So, there you have it, as good a line up of 4K bargains as you’re likely to see. Stocks, we’re told, are strictly limited.

Previous Sony: we are looking for 4K-capable smartphone hardware
Next Native DirectX 12 games to emerge in late 2015 – reports