AOC and G2 Esports have announced they are set to renew their successful partnership since AOC is extending a sponsorships deal with the Esports organisation which has been running since 2018.

G2 was first signed by AOC in January 2018 and the collaboration between the two has been very successful, with AOC providing training facilities featuring cutting edge technology for the Esport organisation. The new deal ensures the teams maintain high performance in both training and during competitive tournaments.

The new deal also allows for the release of a new signature edition gaming monitor, designed specifically for the team and fans alike. G2 have proven themselves as one of the top Esports teams in recent times by placing 2nd at this years League of Legends World Championships and by finding success in other genres such as CS:GO, Hearthstone, Rocket league and sim-racing to name but a few. 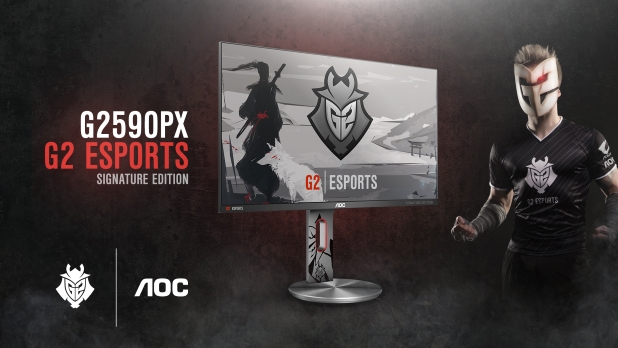 “It’s a great source of pride for G2 to have such strong partners at our side, including AOC. Their contributions are what let us do what we do best – win trophies in style. None of this would be possible without their support and incredible equipment. 2020 will be an exciting year for G2 fans and I’m thrilled that AOC will be right there with us, helping us achieve greatness with their cutting-edge technology,” says Carlos Rodríguez, CEO of G2 Esports.

AOC will provide all current G2 teams with high-performance gaming monitors such as the AOC AGON AG251FZ and AOC will be able to further polish its top-notch devices with important feedback from G2 competitors. G2 and AOC are also set to share appearances at event booths, community tournaments, giveaways and other exciting events planned for the new year.

KitGuru says: Both AOC and G2 Esports are set to benefit from this new extended sponsorship deal. Are you a follower of Esports competitions and who is your favourite Esports team?

Previous Facebook is acquiring PlayGiga as it prepares its own cloud gaming service
Next Xbox hosts ‘Countdown to 2020’ sale, featuring over 500 titles