If you have been floating around KitGuru for a while, then you will know that we like to kick off our peripheral reviews with a look at the software suite. From past experience, this is usually an area where Logitech excels compared to some of the competition, so let’s take a closer look. 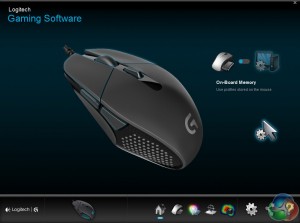 Above you can see the main software window, this is the first thing that pops up on launch and allows you to switch between on-board mouse profiles and those saved on your system. 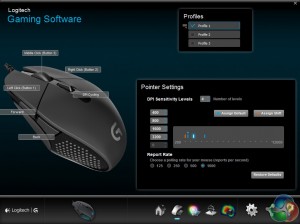 The next tab is where you will find most of the customization settings, allowing you to change DPI levels and change button commands. While the G302 had a limited maximum DPI of 4000, where as the G303 Daedalus Apex can go all of the way up to 12,000. 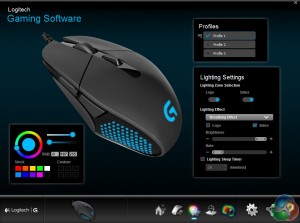 Next up we have the lighting window. Lighting is segmented in to zones for the logo and the side grills, so you can turn either of them on or off. For effects, you can have a solid colour, a breathing effect or a colour cycle, which is my personal favourite. 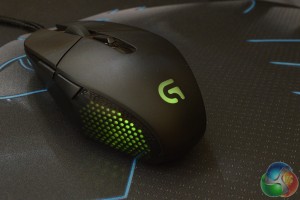 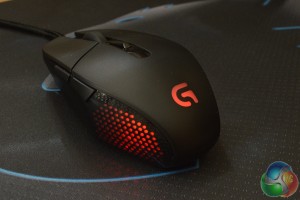 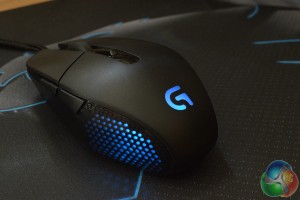 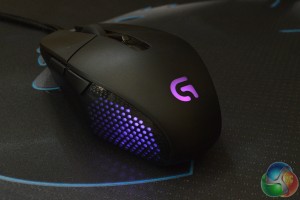 The lighting on the G303 is about as good as it gets. The LEDs shine brightly and different colours are represented very well. If your setup has a particular colour scheme, then this mouse should fit in well. 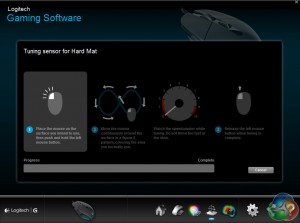 One of the more unique features of Logitech’s gaming software is the mouse surface tuner. As the name suggests, this allows a user to tune the mouse sensor to the surface you intend to use, whether that be a hard wood desk surface, a cloth mouse pad or a hard mouse pad.

The sensor works well across different surfaces even without tuning but the feature is certainly unique and nice to see. 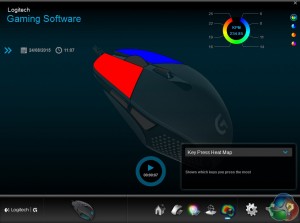 The final tab in Logitech’s gaming software is a heat map feature. This allows you to record mouse movements and then see which keys you press the most. While I don’t have a particular need for this feature, it could be useful for serious MOBA or RTS players, where the speed of your clicks and movements are pretty important.

As always, Logitech’s software is class-leading for peripheral makers. There are plenty of features to make use of, including some very unique ones – such as the mouse surface tuner. All of the basic customization options are also present, allowing for mouse sensitivity adjustments and different profiles for button commands.

Now let’s talk a bit about actual performance. While the G303 Daedalus Apex has an ambidextrous shape, there are no re-programmable buttons on the right-hand side of the mouse for left-handed users. This isn’t an uncommon practise amongst peripheral makers but it is worth noting for the left-handed gamers out there.

The Logitech G303 Daedalus Apex makes use of an improved ‘Delta Zero’ optical sensor, which we first saw on the G302 earlier this year. Once again, the sensor works perfectly fine, I experienced no issues with tracking on multiple surfaces including wood, a granular mouse pad and a cloth mouse pad.

In addition, Logitech’s metal spring tensioning system makes a return in the left and right-click buttons. Once again, while the jump isn’t quite as significant as going from a membrane to a mechanical keyboard, it is easy to notice and the clicks definitely feel more responsive.

The spring tensioning system is designed for competitive MOBA titles in order to register more clicks per second. I’m not a hardcore Dota or League of Legends player so while I can tell the difference between clicks, I am not too sure it will give you a leg up on the competition.

Despite that, the G303 is a fantastic gaming mouse and Logitech seems to be pushing this one towards more than just MOBA or RTS gamers.