In one of your games of Hearthstone in the past few months, have you come across a combination that made use of Leeroy Jenkins to take you out in one turn before you could react? Perhaps when going up against a Hunter your opponent was able to draw themselves upwards of five cards with a Starving Buzzard combination for just a few mana? Well that’s unlikely to happen in the future, as Blizzard has announced that both cards are going to be nerfed, that is, changed to make them a little less versatile.

Leeroy Jenkins, a currently four mana, 6/2 with charge and a battlecry that gives your opponent two 1/1 whelps, will have his mana cost raised to five. While this doesn’t make him much worse, it does make it harder for some of his more irritating combos to be executed and means they can only take place a little later in the game too. 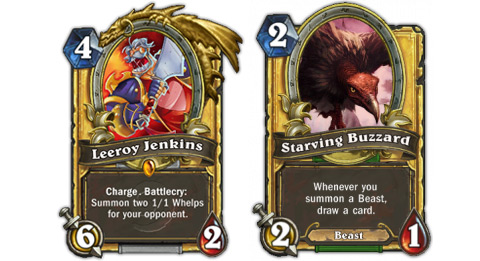 The Starving Buzzard in its current form costs just two mana and is a 2/1 with the ability to draw a card every time you play a beast. Blizzard is changing this card a little more than ol’ Leeroy, upping its mana cost to five, but making it a 3/2 in the process. This makes its usage more of a late game play and that’s certainly the case with its common bedfellow, Unleash the Hounds.

This change to these two specific cards is the last one set to take place before the World Championships at Blizzcon. Each will also be disenchantable for their full cost for a limited time after the change.

KitGuru Says: Has this thrown a spanner into the works of your decks? If so, do you still plan to use either of these cards at all?

Previous In Alien: Isolation, how will you survive?
Next ASUS GTX750 Ti STRIX OC Edition review