Ron Gilbert wants to take us back to the 90s

Ron Gilbert is a name that anyone who was a PC gamer in the '80s and '90s should be well aware of. Along with the likes of Double Fine's Tim Schafer and the rest of the people at LucasArts, he created some of the world's best point and click adventures, like Monkey Island, Maniac Mansion and Indiana Jones and the Last Crusade. Those are pretty antiquated by today's standards, with giant UI's and less than 300 colours on screen at any one time. But there's something nostalgic about that style and those games in particular, which is why Mr Gilbert is now Kickstarting a game that doesn't just homage it, but copies it entirely.

This is Thimbleweed Park, a point and click adventure with the classic verb menu and constantly available inventory. It's set to have the old school function, as well as the aesthetic, which is a very rare thing today, despite the near endless reboots and cash-ins on nostalgia that many artistic mediums are going through at the moment.

This is a step back in time to the late '80s, or as Gilbert explains it: “It’s like opening a dusty old desk drawer and finding an undiscovered LucasArts adventure game you’ve never played before.” 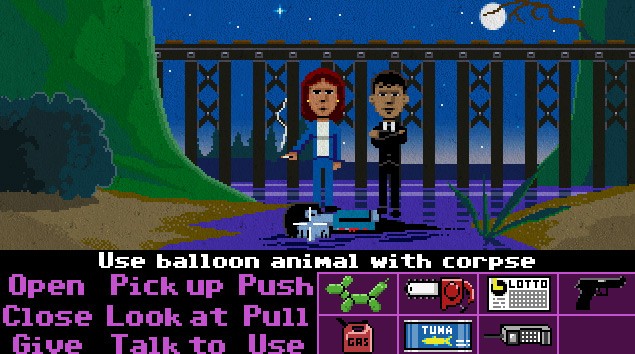 Of course you could could argue that that was the high-point of Gilbert's career and that that's why he wants to revisit it, but it's clear from his description on the game's Kickstarter page that he loves the style of the era. He loves the pixels and misses those sorts of “classic adventures and their innocence and charm.”

As for the game itself, Thimbleweed Park is the story of two “washed up” detectives who are investigating a dead body found in a river. There will be five playable characters and you'll follow each of their stories as you discover just what the town is all about.

KitGuru Says: Gilbert is asking for $375,000 however. I wonder what the budget on one of these games back in the '80s was.