Resident Evil: Revelations 2 producer, Michiteru Okabe, has expressed his excitement surrounding virtual reality headsets and what they can do for horror titles. While virtual reality technology is still in development and has some way to go,  game companies are already eager to make games for VR headsets and Oculus has previously stated that a consumer ready version of the Rift will be ‘coming soon’, which presumably means sometime next year.

Speaking with GameInformer, Okabe said: “I think it makes sense. Having gone from 2D to 3D, now it’s time to surround yourself in these worlds instead of just having a screen in front of you. It makes sense; the technology is there. There’s going to be some really compelling stuff coming out on VR, no doubt.” 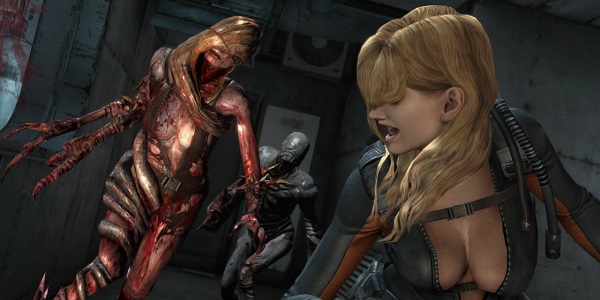 While virtual reality is going to be exciting for most game genres, it is especially pertinent to horror: “It makes sense for a lot of game genres; I think it makes a special kind of sense for horror games where immersion is more important than perhaps in other genres.”

“I think we should most definitely start thinking about what we could do with that kind of technology in the future. It makes perfect sense.”

Another Resident Evil Producer, Yoshiaki Hirabayashi, also said in the Interview that Capcom had recreated the mansion from the first title in Virtual Reality as a prototype and joked that if the company were to remake the first game again, it would be for VR.

KitGuru Says: Virtual Reality will be good for horror games but it could also be overly scary and difficult for some to handle depending on the game. A game like Resident Evil, which is fairly action based might not be too bad in VR but games where you are almost powerless and just being constantly hunted down, like Alien Isolation, would probably be difficult to play through for many. Are any of you guys horror game fans? Would you play these sorts of games in virtual reality?