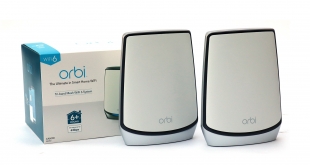 The WiFi 6 standard was launched in 2019, and we saw our first router using it nearly a year ago in the shape of the NETGEAR Nighthawk AX12. But the lack of WiFi 6 client devices has made the faster standard very slow to roll out. Although the NETGEAR Orbi WiFi 6 AX6000 mesh router has been available to buy for a few months, we put off reviewing it until we had an appropriately equipped WiFi 6 laptop available to test its performance properly. But now we have all we need, so it's time to put this upgraded mesh system through its paces.

To remind you what WiFi 6 is about, this is the new 802.11ax standard that is meant to replace 802.11ac and provide a platform for higher-bandwidth wireless networking and more devices. The maximum bandwidth is 9,604Mbits/sec, compared to 802.11ac aka WiFi 5's theoretical 3,467MB/sec, although most routers max out at half that. Whilst the increase in bandwidth for individual devices is considerable, the support for more concurrent devices thanks to the use of OFDMA is equally important, now that so many of our devices use WiFi.

Despite the length of time since our first WiFi 6 review, not many laptops using it are on the market even now, although they are imminent. A number of new phones are WiFi 6 capable, however, including the iPhone 11 and latest SE, Samsung Galaxy S10 and derivatives, and OnePlus 8. This might not be such an issue with the Orbi AX6000, however, because you can get some of the benefit of the faster bandwidth even when using legacy 802.11ac and n devices. This is because the Orbi AX6000 doesn't just supply WiFi 6 to client devices, but uses it for the “backhaul” between router and satellite.

The Orbi AX6000 is essentially the WiFi 6 update to the Orbi AC3000, and there's a significant advance in the performance of the backhaul. This ran at 1,733Mbits/sec using 801.11ac with the AC3000 version, but is 38 per cent faster with the AX6000, using 802.11ax to achieve 2,400Mbits/sec. All devices connecting to the satellite will benefit from its faster connection to the router. But if these are WiFi 6-capable, they can benefit from a 802.11ax 5GHz client connection and have 2,400Mbits/sec of bandwidth as well. Clients using a 2.4GHz connection can enjoy a maximum of 1,200Mbits/sec. 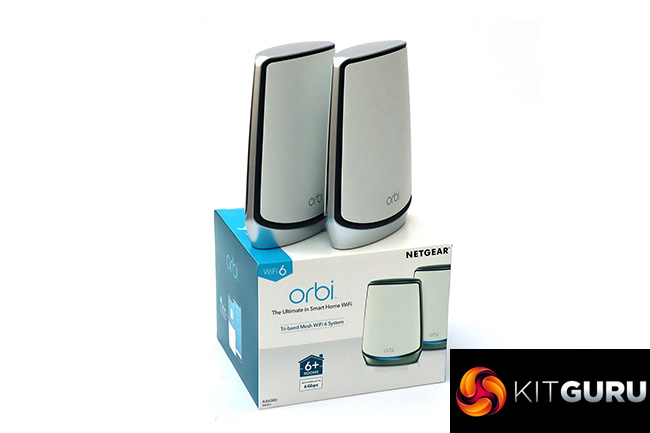 Although the router and satellite look the same from the front, they have slightly different wired connectivity. The router has five Ethernet ports and the satellite just four, whilst the USB port on the original AC3000 models has gone. The fifth port on the AX6000 router runs at 2.5Gbit and is for WAN usage only, whilst the remaining four and all the ports on the satellite are Gigabit-level. The fast WAN port will be handy if you want to uplink the AX6000 to an existing router that also incorporates 2.5Gbit connectivity. But it also future proofs the AX6000 for faster broadband, particularly as the WiFi can theoretically go faster than Gigabit wired Ethernet.

The specification sets the NETGEAR Orbi AX6000 up to be a performance monster. But as with any cutting-edge new technology, you're going to pay considerably for the privilege. The two-unit RBK852 bundle we reviewed will set you back a princely £700, when the original two-unit RBK50 can be had for £300. For that kind of money, this better be the best mesh WiFi system on the planet. Let's find out if it is.