Netgear has been one of the main driving forces behind Mesh WiFi adoption for years now. Providing a strong, speedy WiFi signal through all areas of a home or business can be a challenge, with some rooms getting weaker performance than others, which is something a Mesh router setup can solve to great effect. Now, Netgear is trying to get gamers to adopt this technology with the new Nighthawk Pro Gaming Mesh WiFi router.

This is a tri-band mesh router with software specifically developed to reduce ping times and enhance online gaming performance while also extending WiFi range throughout the home. The Nighthawk Pro Gaming Mesh WiFi System (XRM570) has two components, a Nighthawk Mesh EX7700 Tri-band WiFi extender and the Nighthawk Pro Gaming XR500 router. You can replace your house's main router with the XR500 and then put the EX7700 WiFi extender nearer to your gaming space. Both the router and the extender are pre-paired out of the box, so getting better signal should be as simple as plugging it all in and switching it on. 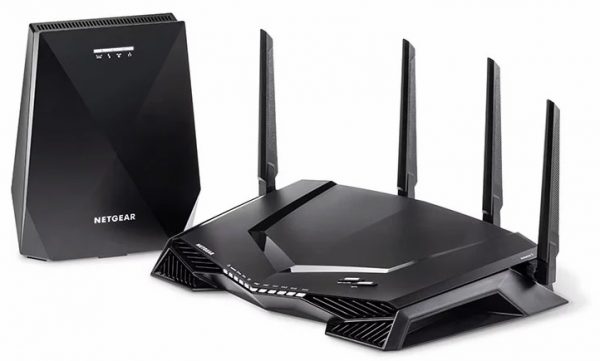 WiFi extenders have been on the market for years now but Netgear's EX7700 sets itself apart by implementing a dedicated high-speed channel for data and pairing that with smart features that seamlessly organise and prioritise traffic for different devices.

The router itself is also quite powerful and comes pre-loaded with DumaOS, a dashboard geared towards the gaming crowd with VPN, QoS, Network Monitoring and Geo Filtering capabilities. If you are a single person living in a small flat, then all of this might be overkill, but if you are in a house with multiple people and high bandwidth requirements for streaming, gaming, browsing etc, then a system like this could be worth looking in to for better performance.

The Nighthawk Pro Gaming Mesh WiFi System is available starting this month, it is pricey though, coming in at the £319.99 mark.

KitGuru Says: I used to live in a moderately sized four-bedroom house and getting decent internet signal to two of the upstairs rooms was a hassle with just one standard ISP-issued router. Are any of you looking to upgrade your networking gear? Are you thinking about making the jump to a Mesh WiFi system at all?

Previous Apple hires new chip architect, could be looking to move Macs to ARM CPUs
Next Sharkoon’s Gaming DAC Pro S will upgrade your audio at a sensible price