Taking the trays out from the Synology NAS unit is a straightforward process. Simply slide two levers to an ‘unlocked’ position then open the trays.

The trays spring open and you can then pull them out. We really would have preferred to see these mounted from the front, for simple convenience.

The two hard drive caddies are well made and feel quite strong, even though they are plastic and not metal.

Simply slide in the hard drives and open the package with the screws.

The hard drives are locked into position by 3 screws on each side of the drive.

Inside there is an 1.67ghz ATOM processor attached to a mini motherboard with 1GB of DDR2 6400 memory. The motherboard is very high quailty, comprising solid state capacitors and chokes throughout. A Bothhand 24HSS1041A-2 IC is used to control the 1000 base T full duplex internet connection. Beside this is a ITE IT8720F super I/O controller which reports on various temperatures across the PCB and also handles fan speeds.

The fan cooling the system is a high quality YSTECH 80mm unit which generates up to 35dBa while producing an airflow of 40 cfm. This fan is installed at the front and forces air from the front, out the rear. We were surprised to see that the DS710+ doesn’t have any ventilation holes at the fan but there is a small grill under the case. A rather unusual design ethic which we would assume is aimed to reduce noise. 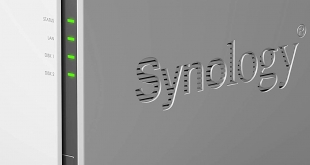 Synology has announced the launch of its latest entry-level 2-bay network attached storage enclosure. The …