I will be totally honest, for the last three or four years of my life I have been a dedicated follower of QNAP NAS products. I have used almost all of their range and have even beta tested some products for them, offering views and opinions. Their build quality is second to none.

When I received this Synology DS710+ for review I was expecting to be disappointed because I had seen some of their lower end products before in shops and felt the performance was also going to be lacking. I have spent a small fortune on my home network and expect great performance when streaming Bluray images or copying across massive files (often in excess of 10GB).

To say the Synology has surprised me would be an understatement.

Initially I found the proprietary software clumsy and while I adapted there are a few things I would still change. They should contemplate offering a forced wizard based admin system for inexperienced users and they might also want to introduce a working firmware, preinstalled from the factory. For semi experienced people it won’t be an issue to update via the CD (or online) but if Synology want to target the mass market audience these are things which could very well frustrate their customers and even damage a repeat sale. We also would change the chassis design a little and add a dust filtered vent at the front for the fan to suck in cool air in a direct ‘front to back’ air flow method. While the processor is well within specifications, we recorded temperatures reaching 70c – a better air flow arrangement would lower this considerably. Again, these are minor points and don’t affect the operation of the unit in anyway – I appreciate the sealed front to reduce noise, but I am positive a compromise could be made.

The DS710+ is lightning fast, thanks to the 1.67ghz Intel Atom processor paired with 1GB of DDR2 memory and we like the attractive yet understated appearance. When we tried multiple read and writes from several systems in our network the ATOM processor breezed through it with ease … while they might not be a powerful desktop processor, for a NAS system they are a perfect pairing.

I believe the DS710+ is going to be faster than most ill configured 1gbit networks out there, you really do need to make sure the partnering equipment is up to the task.

While I know many people will find the asking price of £374 high, it is actually very competitive. I have approached this Synology NAS server from the other side of the market, spending many years configuring systems costing between £1,000-£2,000, so when I say this is a bargain I really do mean it. I was also able to use my 3TB external eSATA Drive via the DS710+ which meant I literally quadrupled my storage without blinking an eye. You can buy it from Dabs over here.

KitGuru says: When you factor in they also offer a full three year warranty it is hard not to be impressed. 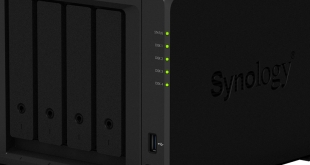