One of the biggest releases of 2014 will be the Hollywood extravaganza Jupiter Ascending. With a special effects budget likely to be larger than the GDP of some small countries, you might be wondering what kind of hardware sits in the background to make it all possible. KitGuru got some idea from Super Micro’s Dev Tyagi over at CeBIT 2014.

Back toward the end of the Pentium 4’s life, there was a move to smaller, simpler, more parallel computing units that came from the Banias development team in Israel. Although clocks and power draw dropped, the overall effect was a significant boost in performance. For 2013, Intel had 5 server CPU launches scheduled and two of them were for Atom-based processors. At CeBIT 2014, Supermicro was showing off the kind of systems you can create when you use a lower wattage CPU and simply pack a huge number of them together into the same chassis.

For those outside the server workspace, when you see ‘U’, it means a single unit of space that you would buy/rent in a server farm. How much compute power you can pack into each U that you pay for, determines your costs/profitability.

On that basis, if your processing requirement needs an absolute stack of i86 cores, then Supermicro’s 6U 112-node MicroBlade could be interesting. It’s an extreme-density, ultra energy-efficient micro server system loaded with Intel Atom C2000 series SoC processors, each of which can have up to 8 cores. This modular Blade architecture is designed to maximises rack utilisation by offering 112 independent power-conserving nodes – with each one dropping as low as 10W.

If you think that’s a lot, then you’ll be impressed to know that it’s also possible to double that density – with 224 Intel Atom-based nodes.

In July 2014, a new Hollywood blockbuster will hit our screens. Jupiter Ascending has a stellar cast – and is a Wachowski twins epic – so special effects are part and parcel of the overall experience.

By continuously innovating – constantly adding in more power per node – the time taken to render a section of film will reduce. Which decreases costs and increases productivity. 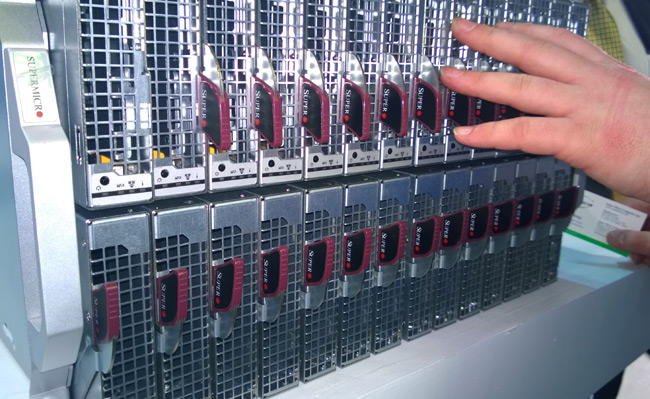 “Our latest server innovations are leading the industry for energy efficiency, density, and manageability for maximized performance per watt, per dollar, per square foot,” said Charles Liang, President and CEO of Supermicro. “Our new Intel Atom based platforms including the 6U 112-Node MicroBlade and 3U 24-Node MicroCloud are defining the future of green computing with solutions that support a wide range of workloads in Enterprise, extreme scale-out Data Center, Cloud and SMB applications. Additionally with next generation platforms supporting NVMe, 12Gb/s SAS3 and native 10GbE/40GbE, Supermicro offers the world’s most extensive range of advanced power conserving server, storage and networking solutions on the market”.

“The rate at which we’re able to increase the power available within these systems is amazing”, said Dev Tyagi, General Manager at Supermicro (right, below). “The innovation never stops and the systems just keep on getting faster”. 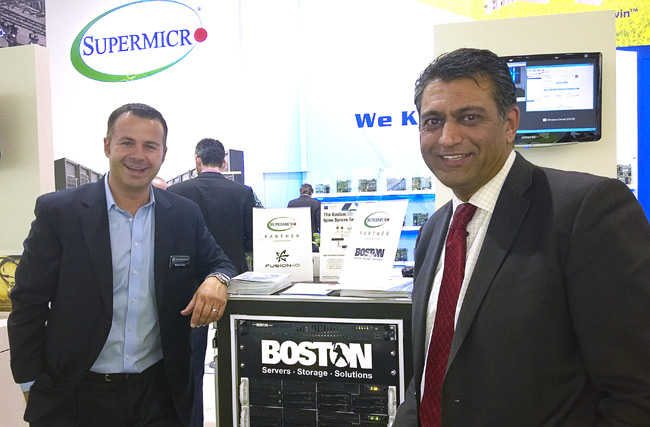 Supermicro’s work in this field is absolutely adored by Intel.

But, within any system, you will still have bottlenecks.

Also on the Supermicro stand we caught up with Marius Tudor (left, above), who heads up Strategic Partnerships for a company called Fusion-IO. From what we can tell, Fusion-IO has never seen two components joined together without thinking “Hey, bet we can make that faster by adding memory some memory”.

If you’re an IT professional and wondering just how much better Fusion-IO can make your world, Marius’ company offers a free tool called ioTurbine, which helps you model the performance improvements that you’re likely to find by installing various Fusion-IO products around your system installation.

One of the physical products that Marius pointed out was his ioDrive Octal product which can add more than 5TB of memory to a system, using a single PCI Express slot.

Going back to Hollywood, while there’s no guaranteeing the plot for Jupiter Ascending, the enormous amount of special effects are likely to shine, rendered with some help from high-end Supermicro kit.

.
KitGuru says: The enthusiast community tends to focus on single CPU systems where ‘expensive’ is anything over £2,000. The kind of technology that Hollywood is using for rendering is absolutely amazing. We can’t wait to see the final results when Jupiter Ascending gets released in July.