Security is all about trust. Trust comes from familiarity. There are few brands with the same familiarity as Kodak. Now the company is taking a wider view of its ‘focused on imaging' mission – broadening it to include security. Kodak Smart Security has its own CEO, David Haddad, and KitGuru caught up with him to understand more about the company's plans to protect homes and offices with Kodak branded cameras, alarms and accessories.

With a global home security market that's likely to be worth more than $51 billion by the end of 2022, it's no surprise that more brands are looking at this expanding market. As the price of individual ‘components' continues to drop, communications continues to improve and the software solutions become easy to use and more flexible – everyone is thinking about security. Certainly, it's a huge driver for the hard drive and NAS markets.

Then there is the ‘If This Then That' (IFTTT), which lets you pair and share solutions to every day issues – from lighting the doorway when a parcel or pizza is delivered, to recording the output from various cameras when an intruder is detected near your property. It's free, functional and people seem to have fun with it.

So where does Kodak fit into all of this?

One hundred and thirty three years ago, George Eastman decided that some money could be made by selling cheap cameras and then ramping up the margins on the papers and chemicals necessary to produce photos. This was known as the ‘razors and blades' sales strategy. His intuition was right and Kodak was born. At its peak, 90% of all the film sold in the States was Kodak. Unfortunately, having created the very first digital camera, Kodak dropped the idea in case it ‘impacted film sales'. We can file that under ‘Whoops'.

Kodak Smart Security's CEO, David Haddad, showed us the products that they have been developing in France, Belgium and Spain – and which will be available in the UK in February. According to David, the aim is to create high quality security products, under the familiar Kodak brand and to then encourage people to use them in both traditional and innovative ways.  Taking no chances, the outside of the booth where we met David was hung with all of Kodak's latest glories – including the fact that Star Wars, Wonder Woman and Dunkirk were all shot using its image capturing technology. 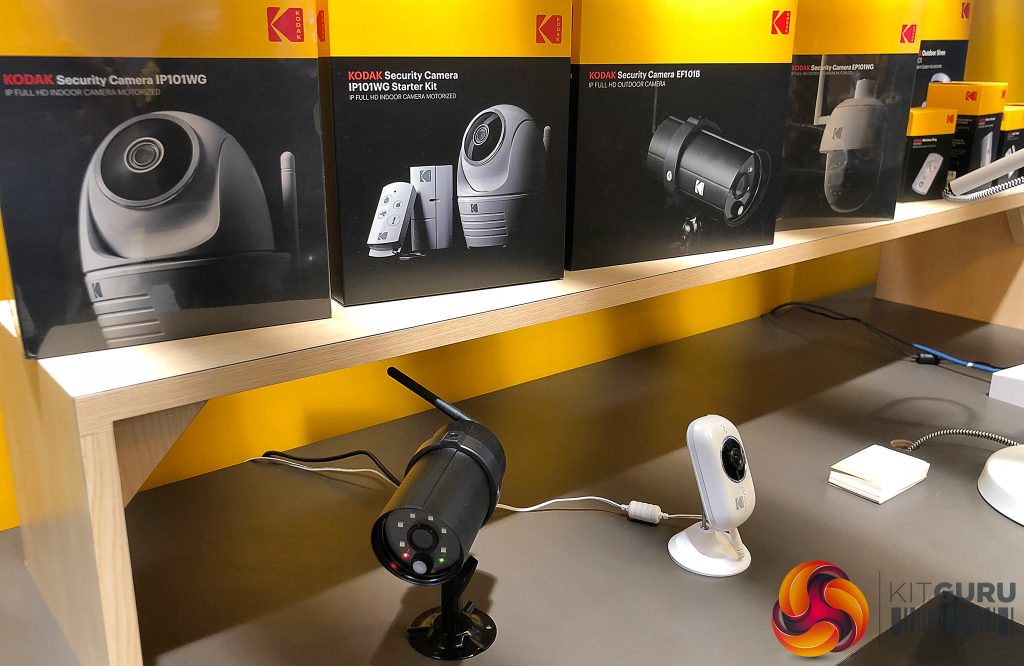 KitGuru says: Camera security is like insurance: If you're not the victim of a incident, then you probably don't care too much – but once something happens, you'll wish you had all the crystal clear HD footage available. the IFTTT stuff is fascinating and it looks like security is becoming better at the same time that prices fall and it becomes more fun (for tech lovers).