The engineers at Intel Labs have created a cryogenic control chip, code-named Horse Ridge. This chip is a step in the right direction for the creation of the first commercially viable quantum computers. Horse Ridge will be able to manage multiple qubits (quantum bits) and define the next steps for scaling larger systems.

In collaboration with QuTech, the research centre for Quantum Computing and Quantum Internet made from a partnership between TU Delft and TNO (Netherlands Organization for Applied Scientific Research), Intel developed Horse Ridge using its 22nm FinFET technology.

While trying to understand the potential of quantum computing, engineers and researchers have been working extensively in qubit fabrication, creating chips to show how much a few qubits operating in superposition can do. In the early stages of quantum computing development, Intel had pinpointed a bottleneck for the “commercial-scale quantum computing: interconnects and control electronics.”

This bottleneck is now about to be solved with Horse Ridge, setting a significant breakthrough on the path for quantum practicality. Quantum practicality is a “benchmark against which the quantum research community can determine whether a quantum system can deliver game-changing performance to solve real-world problems”. To achieve quantum practicality, Intel is investing in the hardware and software needed, so it can create a commercially viable quantum computer. 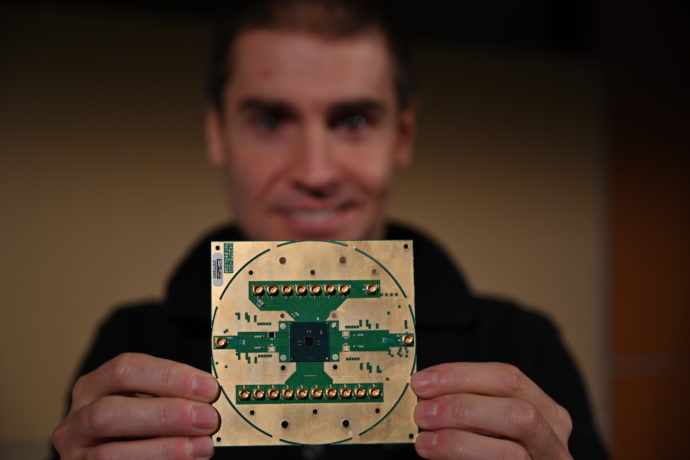 Horse Ridge “simplifies the control electronics required to operate a quantum system”, by taking away all of the cabling, and wiring and replace them with a more commonly used SoC (system-on-chip). This solution increases the qubits’ performance and enables the creation of quantum systems with a bigger qubit count. The SoC also makes the qubits stand closer to each other, reducing the complexity of quantum control, from a lot of hanging cables to a single package.

The SoC is “designed to act as a radio frequency (RF) processor to control the qubits”, which is programmed with instructions that are transformed into electromagnetic microwave pulses that change the state of a qubit. All of these operations are made at 4 Kelvin (-269 ºC), but Intel is researching in to create “silicon spin qubits”, enabling these same operations at slightly higher temperatures. Intel is also studying a solution so that these silicon spin qubits and the cryogenic controls operate at the same temperature, all in one unified package.

To learn more about the Horse Ridge, click HERE.

KitGuru says: How significant could this be for Intel and quantum computing?