The folks at noblechairs are bringing a fresh new look to its chairs later this year thanks to a new partnership with Bethesda. Under the partnership, we’ll see officially licensed chairs based on Bethesda’s biggest franchises, including Fallout, The Elder Scrolls, DOOM, RAGE and Wolfenstein.

The final designs for each chair are currently in progress, so we don’t know what they will all look like just yet. In the meantime, though, here is the current concept for the Fallout chair, which will be the first to hit the market: 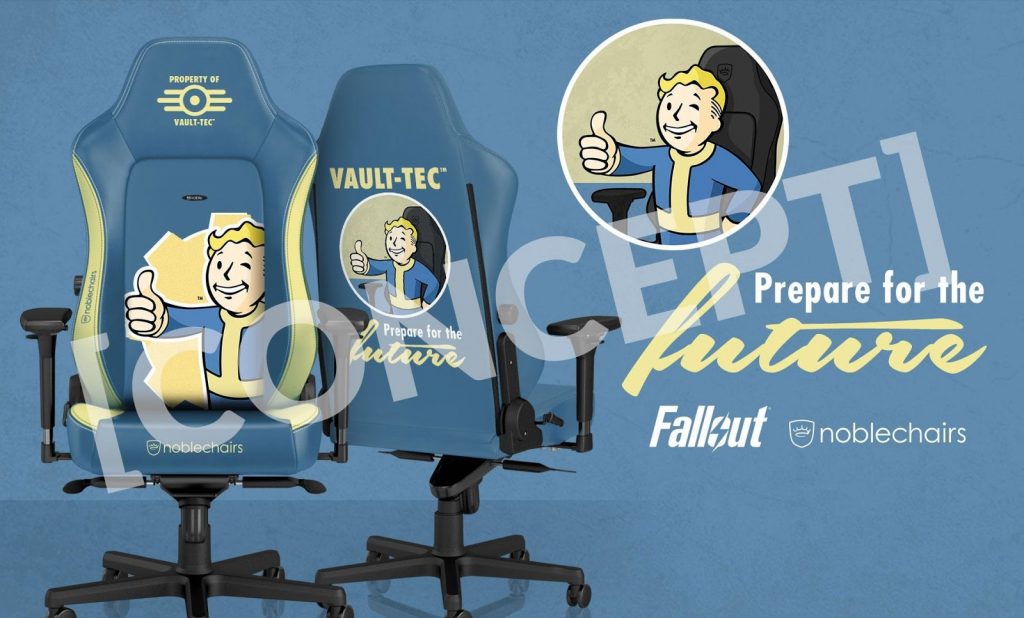 The Fallout chair is coming in Q2 2020 and will be followed by a DOOM edition, which is also supposed to be coming in Q2 2020. We’ll hopefully get to see what that one looks like soon but it is described as a military green chair with accents and the DOOM logo in white stitching. The backrest will feature the Slayer Glyph in blood red.

After these two are done, noblechairs will be designing for other Bethesda franchises like The Elder Scrolls, RAGE, Dishonored, The Evil Within, Prey and Wolfenstein, using distinct elements from each game.

Speaking about the new partnership, Steven Levitt, Business Development Manager at noblechairs said: “Bethesda is one of the industry’s most respected and accomplished game studios in the world. A partnership with a global high-end gaming chair brand is a great match for those who want to play games in comfort. I’m looking forward to seeing the final designs in the flesh, rip and tear!”

There will be more announcements to come as designs are approved for each franchise, so we’ll be keeping an eye out for more.

KitGuru Says: The Fallout chair concept design looks great in my opinion, so I’ll be looking forward to seeing the rest. What do you all think of the upcoming Fallout chair?

Previous Call of Duty: Warzone removes Trios in favour of 4-player squads
Next Sherlock Holmes: Crimes and punishments is free on the Epic Games Store