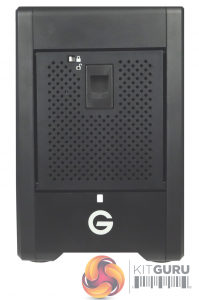 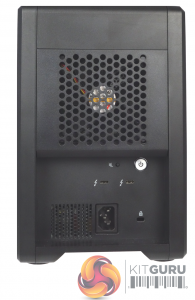 The G-Speed Shuttle’s design, to this reviewer at least, looks like a miniature “jerrycan”. It’s been designed to be carried and although it weighs in at a fairly hefty 7.4Kg, the broad carrying handle has been well thought out to make lugging it around as easy as possible.

The front of the unit is dominated by the drive bay door which hinges down to access the drives. At first glance it looks like the door has a simple sliding lock, but it’s a bit more intelligent than that. Once the lock is enabled you can’t move the latch. Instead you have to use something like a paper-clip pressed into the marked hole in the door under the lock to free the latch – a simple but effective way of added security while the drive is being transported around. Under the door is a drive activity LED.

The rear of the G-Speed Shuttle is dominated by the grill for the 120mm fan (YS Tech FD129225HL-N) cooling fan. Under this and in a recessed panel sit the power button, which is a bit awkward to get at to say the least, the two Thunderbolt 3 ports, a speaker mute button and the power socket. 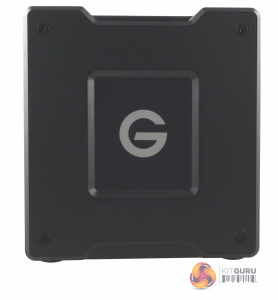 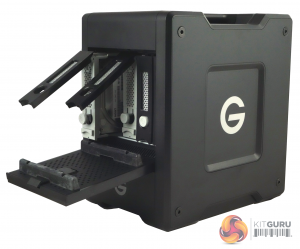 The four vertically mounted drive bays are found behind the door in the front panel.  The drive trays themselves are locked in position via a simple button and lever mechanism. Unfortunately the drive trays are not a tool-less design, but as this is a box designed to be carried around that makes sense as it does provide extra security to stop any drive movement while in transit. Each of the trays has a drive indicator LED built into it. Also you need to bear in mind that the drives are not hot-swappable. 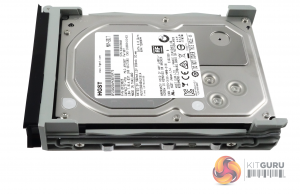 Previous The UK grants Huawei permission to sell 5G infrastructure, with limitations
Next Samsung might struggle to fix the issues with its delayed Galaxy Fold