The heroes of Wired Gaming at MSI Beat IT 2014

With a load of the world’s top media in attendance, Saturday will see the action begin for the finals of the MSI Beat IT 2014 gaming championships. While the clever money is going on the American and Far East teams, one story stood out a mile for KitGuru. We hunker down for pre-match huddle with the chaps from Wired Gaming.

What MSI has done with the Beat IT gaming finals is smart and, in all probability, signals a new dawn for this kind of event. They made sure that the regional finals were just that – regional.

While we all know that the USA, Sweden and various countries in South East Asia will dominate most events, that could change. There is nothing about competitive gaming to say that the best player(s) in the world must be male. There’s no reason why they shouldn’t come from Australia, Latin America or even the Middle East.

An that’s just where Wired Gaming originate from. Lebanon.

We spoke first with MSI’s Middle East marketing guru, Derek Huang, to ask how the tournament was structured in his region,

“We had over 100 applications to join”, Derek explained. “Teams from across the Middle East were keen to be involved”.

“They love DOTA, Starcraft and other online games and were keen to show their skills”, he said. “In the end we had 111 teams enter and had to choose 64 for the regional heats”.

So far, so good. But why the label, ‘Heroes’ when we speak about Wired Gaming?

We spoke with team member and university graduate Charbel Merhej who told us with a smile, “Yes, you can say we had to struggle to get this far”.

“After the constant wars in our region, we now have a government that  is struggling to re-build”, he explained. “There are often times when the electricity company can only deliver current for 2 hours a day. In order to play as much as we need to in order to compete, we need to resort to petrol powered generators”.

We asked about sponsorship.

“Almost non-existent”, Charbel told us. “You would think that having a Lebanese team win the regional finals and then travel across the globe to Taiwan would have generated some support from the big companies back home – but no luck”.

Fighting against teams from countries as affluent as UAE (Dubai/Abu Dhabi etc), it’s clear that to come out ahead of 111 other teams on ‘2 hours of electricity a day’ takes a special effort.

Here’s the Heroic Wired Gaming crew with Derek Huang (front right). Charbel is 3rd from the left in the back row. 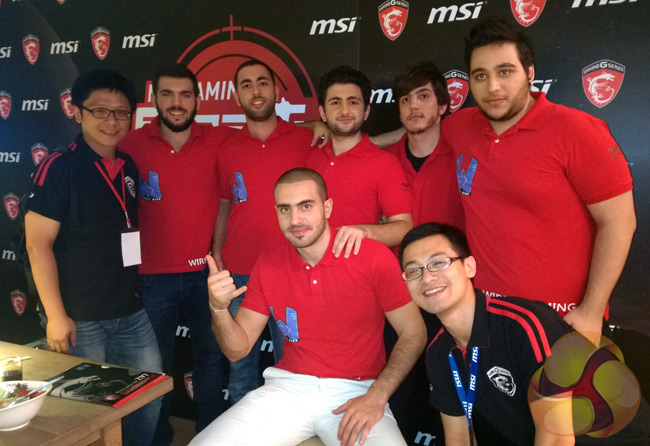 .
KitGuru says: We wish the Wired Gaming crew good luck at Beat IT 2014. With their level of drive and determination, they deserve to go far.

Let us know what you think about global tournaments in the esports arena and whether you’ve had to overcome any challenges to game over on Facebook by clicking HERE.