The British Academy of Film and Television Arts (BAFTA) awarded its second eSports Audience Award in a ceremony last night, giving the people a vote in recognizing the popularity and importance of eSports and related game franchises.

The nominee list, chock-full of AAA-rated MOBA and TDM games like Overwatch, DOTA 2, LOL and CS:GO, counted in its ranks a mobile game, Clash Royale. For those who do not care for mobile gaming, Clash Royale is a card game/PvP brawler for mobile (Android and iOS), and a spin-off of the original Clash of Clans, by the same publisher and resorting to some of the original developers of Clash of Clans.

BAFTA, much to the surprise of onlookers, announced Clash Royale as the winner and left many purists livid, as can be seen by the award’s twitter feed. 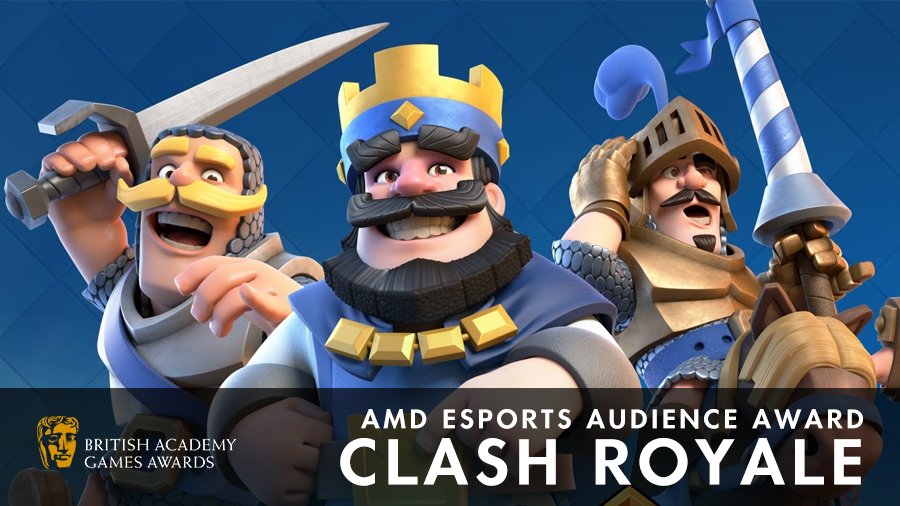 Despite its popularity among mobile gamers, smartphones are hardly a spectator sport when compared to mature competitive franchises that bring in the crowds by the thousands and rake in the money prizes like CS:GO, Overwatch, League of Legends and DoTA 2. But it may just be time to rethink this…

For a bit of perspective, Overwatch hit 25 million online players a couple of months ago, while the biggest League of Legends event in 2014 was streamed to over 27 million online viewers. ESL’s Intel-sponsored “Intel Extreme Masters” four-day gaming event drew in 104,000 visitors. Most, if not all, offered big money prizes.

Clash Royale has – on Android alone – over 100 million installs. You can safely bet there are quite a few on iOS too, and its players are very active. Which would account for the presumable deluge of votes on social media (BAFTA’s method of choice) for the Audience Award. Ironically, the award is also sponsored by AMD who even gives away a bunch of prizes, including a full gaming PC, to one lucky voter/winner. Not that anyone will be playing Clash Royale on one.

In the long term, considering AMD is a mobile-less semiconductor design company, this could actually have AMD’s beancounters wondering if the sponsorship is worth keeping.

KitGuru Says: While we’re hard-pressed to declare Clash Royale a “spectator sport”, it is clear that the install base and players for iOS and Android far outmatch desktop counterparts. After this result, we may be seeing sponsorships and competitive eSports matches on Clash Royale to pick up.