Windows 10 might be downloading on to PCs without consent

If you have been ignoring the little upgrade to Windows 10 prompt since the OS launched at the end of July, you may actually find that it has already downloaded and stored itself on to your system to save time, just in-case you decide to make the jump.

If you are still sat on Windows 7, you may be able to find a ~BT folder on your system, which is where the Windows 10 install files reside. This was uncovered by The Inquirer who had a reader email them with proof that Windows 10’s install files had downloaded on to his system, despite not even registering for the free upgrade. 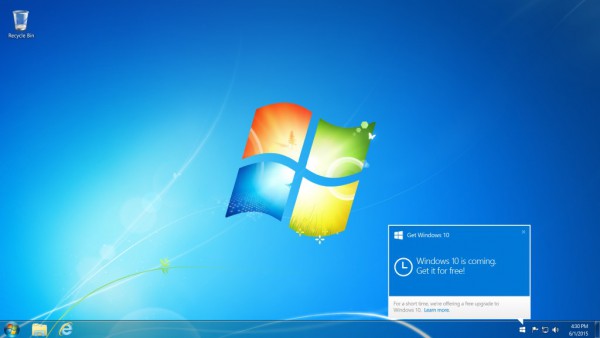 For most, this won’t really matter much. However, this could be an issue for those who are perhaps low on storage space or have internet data cap. On top of that, many people will likely take issue with Microsoft’s tactic here, after all, downloading and storing files on someone’s machine without their knowledge or consent is a bit of a dodgy move.

Microsoft hasn’t denied that it has been doing this either. In a statement sent to The Inquirer, a spokesperson said: “For individuals who have chosen to receive automatic updates through Windows Update, we help upgradable devices get ready for Windows 10 by downloading the files they’ll need if they decide to upgrade.”

The download was handled via Windows Update. However, Microsoft probably should have reserved this update for those who actually registered interest in a Windows 10 upgrade, rather than pushing them in to it.

KitGuru Says: I imagine there will be more than a few people out there that will take issue with this approach. Perhaps Microsoft should reserve this update for those who actually registered for a free copy of Windows 10 but haven’t got around to making the switch yet.