For some, RGB has gotten out of hand and is an unstoppable marketing technique, for others, it’s a matter of versatility in customising the theme of their systems. The Cooler Master MasterAccessory RGB Hard Gaming Mousepad is the latest in this trend, however “it isn’t all about looks.”

“The RGB gaming mouse pad is also optimized for peak performance. A textured, low-friction surface is specially designed and calibrated for the precision of optical and laser mice sensors. The result is a mouse pad that performs as well as it looks,” explains Cooler Master.

Of course, this isn’t the first RGB mousepad on the market, directly competing against the Corsair MM800 Polaris, Razer Firefly and  SteelSeries QcK Prism RGB mousepad and many others. Occasionally, only three sides of an RGB mousepad will be covered by lighting zones, but the MasterAccessory RGB Mousepad ensures that all sides are lit up, in sync. 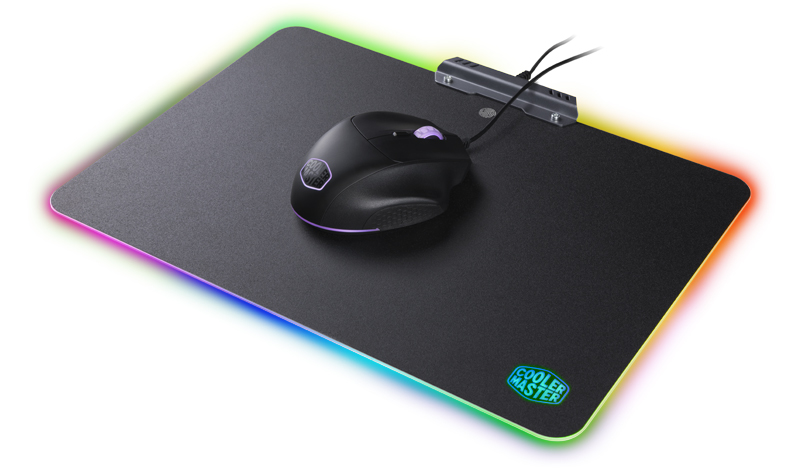 The mousepad itself is about the same size as its competitors, coming in at 350mm x 264mm x 2mm (WxHxD). It’s held in place by five sizeable rubber pads, while weighing 808 grams to keep it in place. The braided USB cable is connected to an aluminium bracket, stretching out to 1.6 metres.

Since the lighting is a core feature of the MasterAccessory RGB Mousepad, there are nine preset animations and effects that can be cycled through via a touch sensitive button.

The MasterAccessory RGB Mousepad is available for $30, which is significantly cheaper than Corsairs $50 for its MM800 Polaris mousepad. This sacrifice in price will cost the user RGB functionality, however, as Corsair utilises lighting zones and its CUE software for further customisation that just presets.

KitGuru Says: It’s certainly a good entry level RGB mouse mat with a sizeable and tuned surface. While I am partial to a hard mousepad over a cloth one, I know many that would prefer the choice. Do you use an RGB mousepad?