iPhone X has Face ID security in case of theft

Apple’s recent goof during its recent iPhone X Face ID display was promptly explained, with the company stating that it was simply a security measure in place. The tech giant’s effort with security doesn’t stop there, as preventative measures have been put in place in case a thief tries to steal your new, very expensive $999 handset.

The mess up that occurred on stage during the iPhone launch resulted in Craig Federighi being prompted for a passcode when attempting to use the newly implemented Face ID. Addressing this issue, Apple explained that “People were handling the device for the stage demo ahead of time [resulting in it] failing a number of times, because they weren’t Craig.”

This problem is similar to that of the current Touch ID, in that too many attempts results in a prompt for the passcode. In fact, this security measure has been in place even before that, with too many incorrect tried at a passcode resulting in a timeout or complete lock out from the device.

Security concerns don’t stop there, however, with freelance video editor Keith Krimbel emailing Federighi asking “What will prevent a thief from taking my phone, pointing it at my face, and running?” 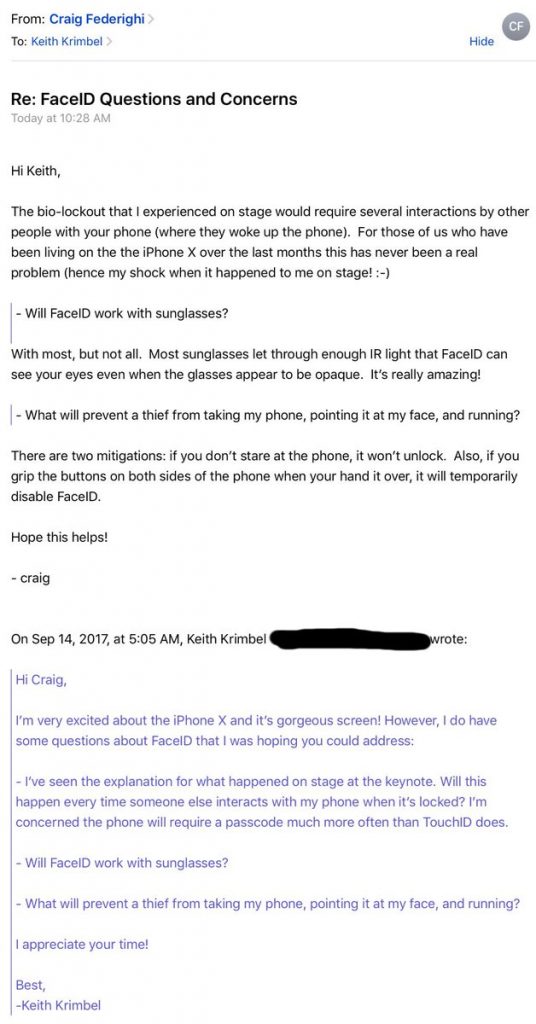 As absurd as this scenario might sound, Apple has the answer in that squeezing the grip either side of the phone will temporarily disable the Face ID feature. It is currently unknown as to the length of time it will be disabled for, but it is a neat security feature that is sure to cause pranks between friends along the way.

Federighi also confirmed that the Face ID should work through “most sunglasses” as they often “let through enough IR light that Face ID can see your eyes,” although this doesn’t apply to all eye wear.

KitGuru Says: I’m sure many of you have ideas of horror stories in your head over Face ID, similar to when Touch ID was first released. I am not sure what to make of the new tech but Samsung Galaxy S8 owners don’t seem to have had a great deal of trouble. Will you be getting the iPhone X?