It turns out that Google is currently receiving and processing an all time high of one million piracy link removal requests per day, proving that copyright holders and media lobby groups just don't give up. The media Industry's new tactic is to simply overload Google with DMCA takedown requests, all in an effort to deter piracy, rather than put more effort in to providing better services.

A few years back, Google would only receive a few dozen takedown requests per year but as you can see on company's public record, the number has risen dramatically since then. To put everything into perspective, Google is asked to take down a new infringing link every eight milliseconds, as opposed to only receiving one takedown notice every six days back in 2008. 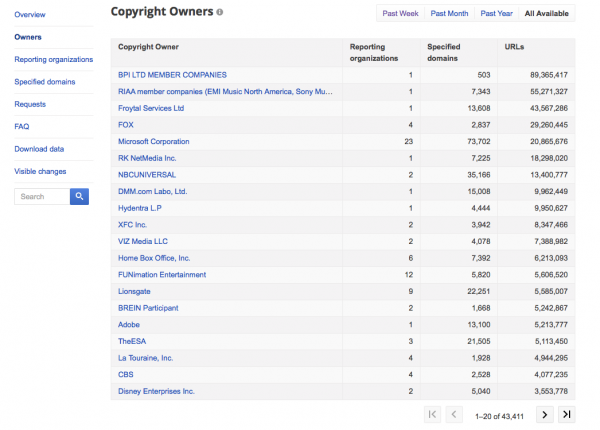 Here's a list of the companies sending in the most requests.

Now obviously, copyright holders do have the right to protect intellectual property but flooding Google with DMCA requests is not a viable method. Google simply doesn't have the man power to process every single request and as a result, innocent sites have fallen through the cracks in the past, being accidentally removed due to fraudulent takedown notices.

While Google has stated that it is doing its best to appease copyright holders, some media groups are claiming that the company can do more. Brad Buckles, RIAA Executive Vice President of anti-piracy, has previously stated that he believes that Google should ban entire domains from its search engine: “Every day produces more results and there is no end in sight. We are using a bucket to deal with an ocean of illegal downloading.”

KitGuru Says: I don't get why all of these problems fall on to Google. It might be the biggest Internet search engine in the world but it shouldn't be responsible for the media industry's often ancient business practises and refusal to provide better services. DMCA takedowns won't deter piracy, better distribution of content at a fair price will. What do you guys think? Is it fair that Google has to deal with millions of DMCA requests every week?