Someone turned Chatroulette in to a first person shooter

If you’ve been on the internet at any point over the last few years, then you have probably heard of sites like Chatroulette, which put you in a video chat with complete strangers over the web. These sites have been used for interesting and entertaining projects on the past but none quite compare to this one.

A small group managed to turn Chatroulette in to a live-action first person shooter, taking unsuspecting chatters on a journey through what appears to be a church infested with zombies. There is even a boss level at the end to keep things interesting. You can see the full video below: 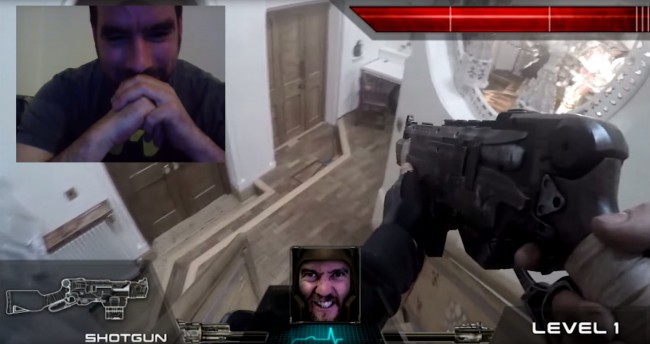 In order to stream the first person footage, the main character of the video wore a motorbike helmet with a GoPro camera attached. From there, a HDMI cable was used and connected to a Teradek Cube transmitter box, which encodes the signal from the GoPro camera in to MP4 format and transmits it wirelessly to a nearby computer.

If you watch the video and the behind the scenes footage, it is clear that production values are quite high, with all of the prop guns being made from scratch and make up being applied to all of the zombies to help make things look believable. If you are interested in media at all, then the behind the scenes footage is definitely worth a watch once you’ve seen the finished film footage.

KitGuru Says: This is one of the coolest viral videos I have seen in a long time. If you watch the behind the scenes footage, you can see just how much effort went in to pulling this off. What did you guys think of the video?