We regularly run polls over on the KitGuru front page in order to gauge what hardware/software our readers are using or have a preference for. Recently, we ran a poll asking which anti-virus you are currently using, and we have compared the results to 2013, when we ran the same poll.

Interestingly, our results, based on approximately 5,000 responses, show that paid anti-virus solutions are almost all in decline, while Windows Defender has seen the biggest increase since 2013. 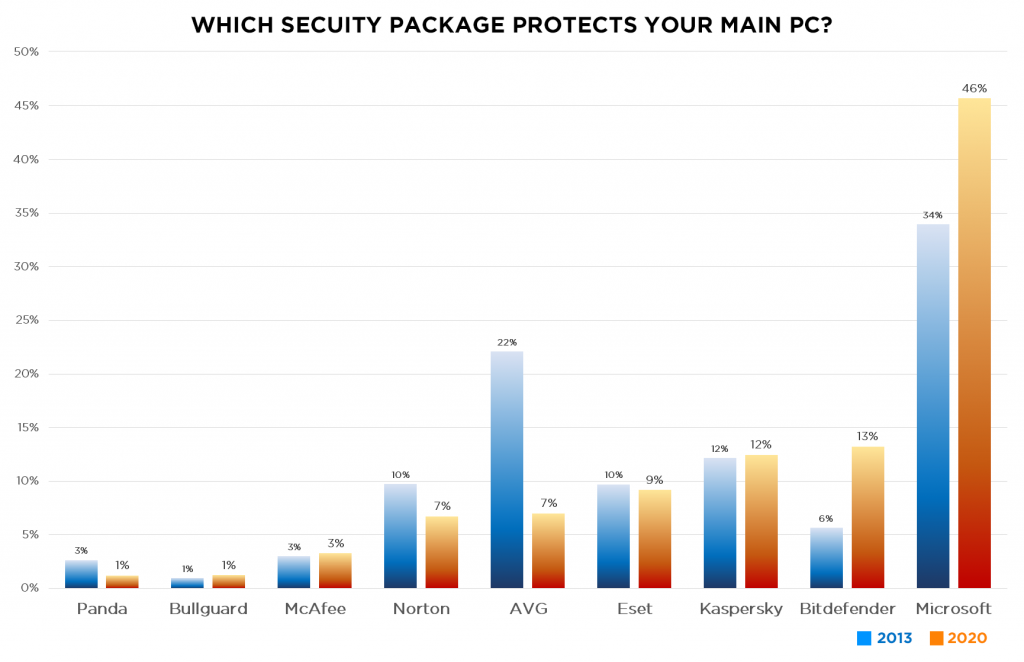 You can see the results in the graph above. Interestingly, while AVG was largely the ‘go to' free anti-virus program years ago, it has seen the biggest decline over the years, dropping from 21 percent to 7 percent usage amongst KitGuru readers. Meanwhile, continued improvements to Microsoft's Windows Defender has seen more users opting to stick with it.

In terms of paid anti-virus programs, the majority of them are in decline, with the exception of Kaspersky, which has held a steady 12 percent of the KitGuru audience. Bitdefender also breaks the mould, rising from 6 percent to 13 percent. Norton, McAfee, Bullguard and Panda are slowly dwindling.

KitGuru Says: These are some interesting results. If you didn't already get involved with the poll a few weeks ago, then feel free to let us know what anti-virus you currently stick with in the comments.

Previous WWE 2K Battlegrounds announced, will replace WWE 2K21 this year
Next Sony announces release dates for The Last of Us Part II and Ghost of Tsushima