After a recent law was passed in Canada that forced ISPs to send copyright infringement notices to their customers, copyright lobby groups have been jumping on the bandwagon and also firing off notices of their own. However, some have been using it as an opportunity to try and extort money from citizens, often with bogus infringement claims. This is something the government will not allow and it's now made the practice of sending out flawed copyright notices illegal.

The notice system hasn't been in place in Canada for very long, but as TorrentFreak points out, it's already hitting ridiculous levels. Even the smallest service providers are sending out thousands of notices a day, so the larger ones must easily be shipping out 10,000 + a piece. Still, this hasn't stopped organisations like US anti-piracy lobby Rightscorp, from sending out extortion letters in the hope that people will pay up to avoid court time.

This is merely a fishing attempt by the firm, as it often has no idea who was responsible for the download. Often all it has is an IP address which could be argued in court as belonging to someone else other than the bill payer. Sometimes firms like Rightscorp will use any settlement paid by the letter receiver as an admission of guilt and will make further charges or attempt to take the case to court. 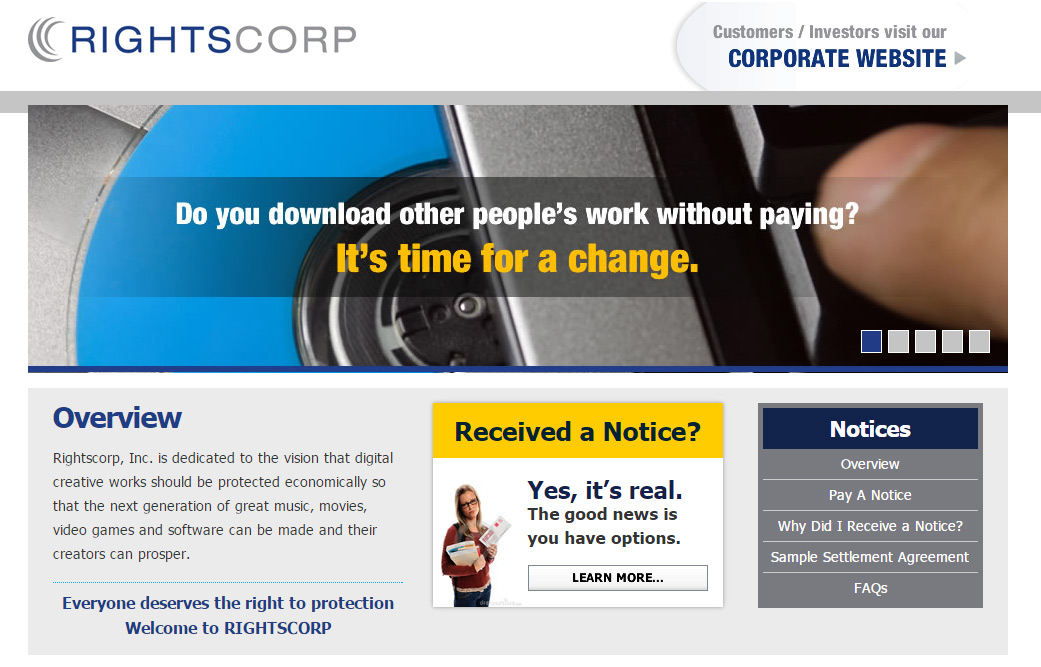 Rightscorp's site makes out like infringement is a relatively small matter, but its threats are much more severe

Unfortunately the threats do work too. Some suggest that as much as $150,000 could be garnered per offence if the case was the go to court. This however isn't true, since each infringement settlement has a maximum payment of $5,000 under Canadian law. The fact that Rightscorp has been claiming otherwise has understandably annoyed the government, which sees it as profiteering. The notices informing people of their illegal activities were not designed to do that.

It will now be contacting ISPs to discuss what can and cannot be sent through to consumers. Sending any erroneous ones however will be outlawed.

It's not clear moving forward whether the government's warning to Rightscorp will see it change its letters, or if it will see the ISPs themselves remove the demand for money – but send the copyright notice anyway to keep themselves on the right side of the law.

KitGuru Says: Of course we would recommend nobody pirates anything, as it is entirely illegal. However, if you receive a notice by mistake, it's rarely a good idea to pay up as it can make you seem guilty by default.