Yesterday, some of the biggest names in the public fight for internet freedoms and personal privacy made an appearance together in Auckland, New Zealand, to talk to Internet Party members and concerned citizens, about the upcoming New Zealand general election and they spent a lot of their time criticising the”adolescent” Prime Minster, John Key while pointing out some of his many lies.

Internet entrepreneur turned political activist, Kim Dotcom put the show together, but for the first time in a while, he wasn’t the biggest man in the room. Sitting next to him was journalist Glenn Greenwald, who originally leaked documents for Edward Snowden, along with lawyer Robert Amsterdam and Internet MANA party leader Laila Harre. However the biggest names on the bill were undoubtedly the video streams of Wikileaks founder Julian Assange and PRISM exposer, Edward Snowden, both of whom were greeted with rounds of applause from the audience.

As part of “The Moment of Truth”, this collective of individuals spent almost two hours dismantling the character and actions of Mr Key, suggesting that his recent political moves regarding classified documents were incredibly suspect. Key has previously said that certain documents need to be classified in the interest of public safety, however he recently stated that he would release them in order to clear up issues surrounding his own personal actions. Greenwald and others pointed out that this means he either classified the documents erroneously in the first place, or now was disregarding public safety in order to save his own skin.

Either way he’s not acting with the public’s interest at heart. 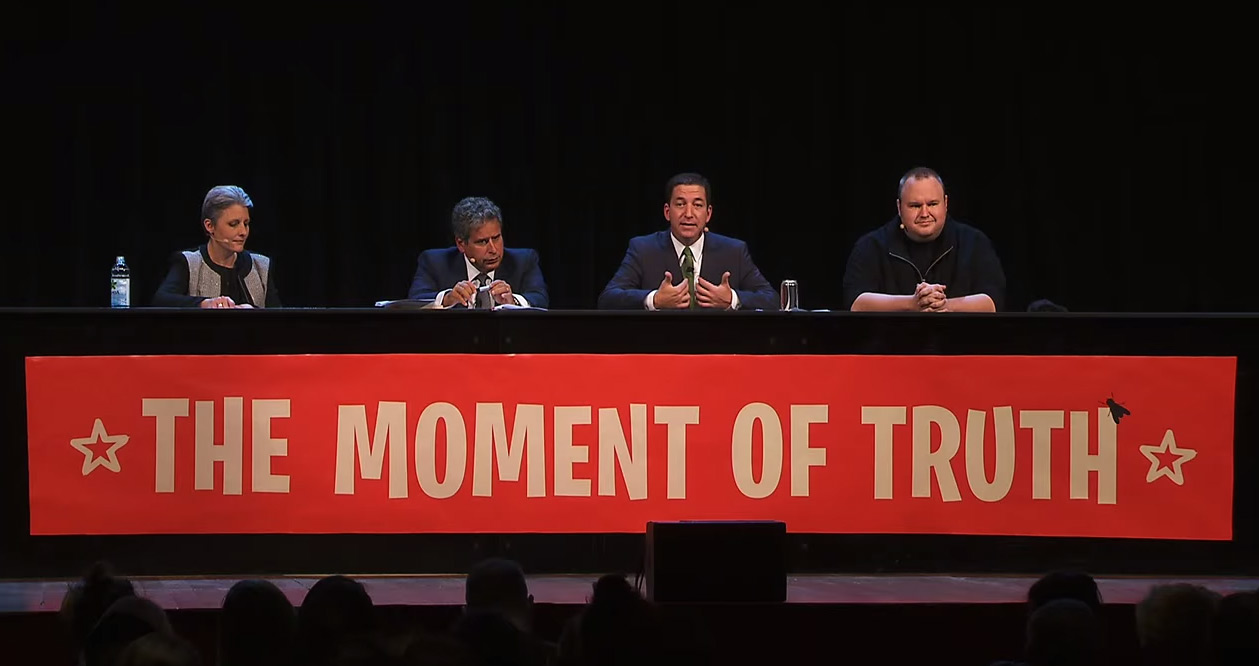 Snowden also revealed that the NSA has a facility in Auckland, the very town that the talk was taking place in, that stored data on New Zealanders, making John Key’s statement of no-mass surveillance in New Zealand seem ever more worrisome.

Dotcom’s own “Moment of Truth,” about Key, had been revealed earlier in the day, in the form of an email transcript, purportedly between two executives from Warner Bros and the MPAA. In it they suggested that John Key had knowledge of Dotcom (something he has denied having until the Megaupload founder was arrested in January 2012) before his residency request and that he had helped approve his immigration in order to facilitate him being extradited to the US to appease movie studios.

KitGuru Says: It’s quite an amazing collection of individuals on the panel. There’s an Australian, wanted for ‘crimes’ in the US and Sweden, hiding out in the Ecuadorian embassy in the UK, alongside a US citizen wanted by many governments, currently residing in Russia and a German national, living half way across the world who may be extradited to the US next year, all of whom were attacking the New Zealand prime minister.

It’s about as international a collective scandal as you can get.