Game developer branded as a terrorist by letting agent

Be careful showing your landlady any screenshots you have from playing Defcon, as you could find yourself suspected of terrorism. That’s the situation Henry Smith found himself in, after his letting agent saw whiteboard drawings he’d made to help figure out elements of a game he was working on: Global Themonuclear War. Ultimately, they informed him that the police  had been called in-case he was a terrorist.

Initially though, the agent asked him about the images, which Smith of course explained were to do with a game he was developing. Thinking perhaps that his might be some sort of clever terrorist cover up, the letting agent decided to let the authorities know anyway and eventually told Mr Smith as much, which seems like an odd move considering the firm’s suspicions. 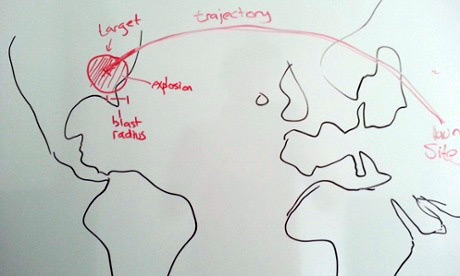 “At first I was ridiculously frightened by the whole thing,” Smith told the Guardian. “When they said they’d told the police I absolutely bricked it. I ran home to check if the police had raided the house or something. It was definitely very frightening to think that the police had a report in their system alleging that I was up to something suspicious involving nuclear warheads. Knowing how the police here deal with suspected terrorists, I was worried they’d do a dawn raid or worse. It was genuinely scary for a while.”

Fortunately for Smith, so far no action has been taken. He believes it’s to do with the police having common sense about the whole thing, pointing out that: ” Nobody is planning an intercontinental ballistic missile attack by Russia on Washington from a rented house in a Bristol suburb. And definitely not by drawing their missile trajectory freehand on a whiteboard.”

KitGuru Says: I wonder if this was just a very panicky letting agent, or if this is what we can expect at a time where the media and government loves to scare us about impending terrorist attacks. What do yo guys think?