One of Google’s latest additions to its long standing search engine, was “sitelinks,” which gave you links to some of the world’s biggest sites’ most popular sections from within the Google results pages. It also often bundled a search box to look through that site’s content. That’s great for end users, but apparently Google isn’t keen to rile up media corporations any more than it already does, so it’s pulled the search boxes from listings related to torrent sites like The Pirate Bay.

While Googling for a site like Youtube now brings up the site itself and several other links to popular sections like your watch history or subscription feed, searching for “ThePirateBay” simply brings up a link to the site. While to some extent, it’s impressive that that listing remains, considering the amount of result removal the studios and lobby groups have been gunning for in recent years, it’s interesting that in this instance Google seemed to take a pre-emptive step, rather than wait for the anti-torrent groups to get in touch.

The same lack of search bar can be found on listings for other big torrent sites too, including the relaunched IsoHunt (not affiliated with Gary Fung). 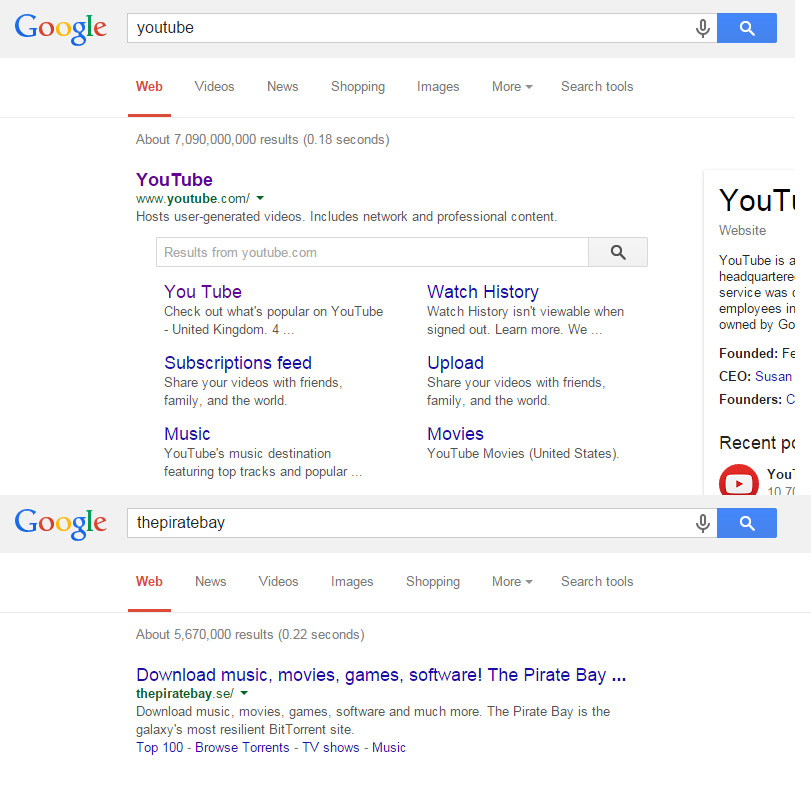 As TorrentFreak points out, this selective removal puts Google in a difficult position. On one hand, it has plenty of complaint and DMCA removal tools for copyright holders to use when they don’t like something related to piracy appearing in its search results. However in this case, with pre-emptive strike, it’s now deciding itself which sites are problematic and don’t deserve a search bar, despite the size of the sites involved.

And if these torrent sites are such a big issue, why list them anyway?

KitGuru Says: Clearly the search bars were implemented automatically, so it seems strange for Google to wade in and delete them manually for certain sites. Youtube hosts tonnes of copyright protected content without permission. I wonder if Google will remove its search bar next?

Previous Google could be working on ‘wireless fibre’ speed internet
Next ASML: EUV tools continue to make progress, adoption to start in 2016