Oculus Rift headsets may be one of the most popular among gamers, but you wouldn't know it by the hardware's availability. Despite still requiring quite a hefty PC to run its many games and experiences, almost no gaming outlets in the UK stock the headsets – in what seems like a bizarre retail strategy from the company.

Oculus VR is a firm with an interesting history. Founded by a young entrepreneur who was much beloved by the community and then cast out and derided for his backtracking and funding of a pro-Trump meme firm, now Oculus is owned by Facebook and a driver of exclusive titles that nobody else wanted.

Oculus was an integral player in the birth of this latest push for virtual reality acceptance on the consumer space, but from anti-piracy efforts on its store, to its data collecting habits, some of the things it's done along the way have been very strange and in some cases rather unlikeable.

One thing it's doing now though which I can't wrap my head around, is making a real effort to limit which companies it allows to sell its hardware. If you haven't bought an Oculus Rift headset, or even if you have, you may not be aware that it's still quite hard to find them.

That's not to say that they are hard to buy. If you head to GAME's website or many of its stores, you will find plenty of Oculus Rift headsets and Touch controllers that you can buy today. The same goes for Curry's, or Oculus' own store. With stock no longer an issue as it was in the early days of the hardware, Oculus Rift headsets are easy to come by. But they aren't available everywhere. 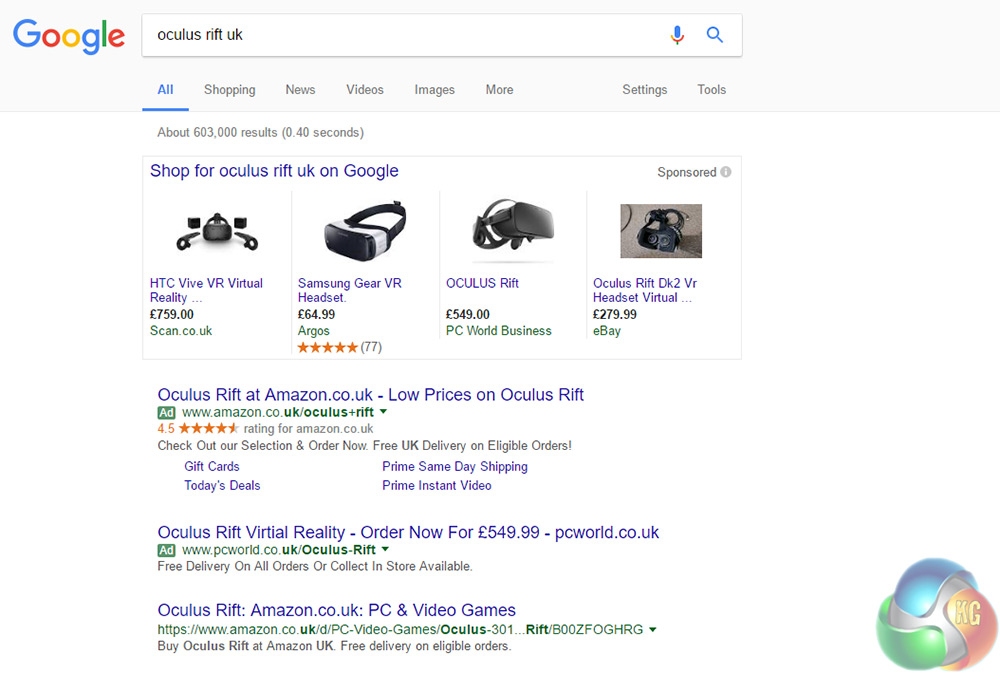 When the top listing on your shopping results is for a competitor's product, something is amiss

Try to buy an Oculus Rift form many of the UK's biggest hardware retailers and you will simply be told they don't have them in stock, nor do they list them for sale. Scan, Aria, Ebuyer, Overclockers UK.

None of them sell Oculus Rift headsets.

This seems rather strange, because these companies are very popular among gamers and they are not ‘anti-Virtual reality'. In fact on all of them you can find HTC Vive headsets for sale and in many cases bundles with that headset and compatible PCs. Many of these companies even sell Oculus Ready PCs, but no Oculus hardware.

We reached out to all of these companies to find out why it was that they weren't stocking any Oculus headsets, controllers or any hardware for that matter. Unfortunately most chose not to comment on the matter, though we did hear back from retail manager at OCUK, Steven Levitt.

“Oculus has been working with select retailers in Q4, and we're not one of those unfortunately,” he said.

When pressed about why that might be, Levitt said he didn't know, but wasn't exactly phased, citing that OCUK had sold “thousands of HTC Vives,” in recent months.

“We're excited about the potential for VR,” he said, and was happy to continue supporting HTC's products. OCUK would be happy to stock Oculus hardware too if the company changed its mind, he said.

It would be remiss of us to just take Mr Levitt's word for it though, so we reached out to Oculus VR itself to find out what it's playing at. Why does it seem to favour only a handful of much more mainstream retailers and ignore the more gaming-focused hardware sellers which have proved so popular with HTC Vive buyers? 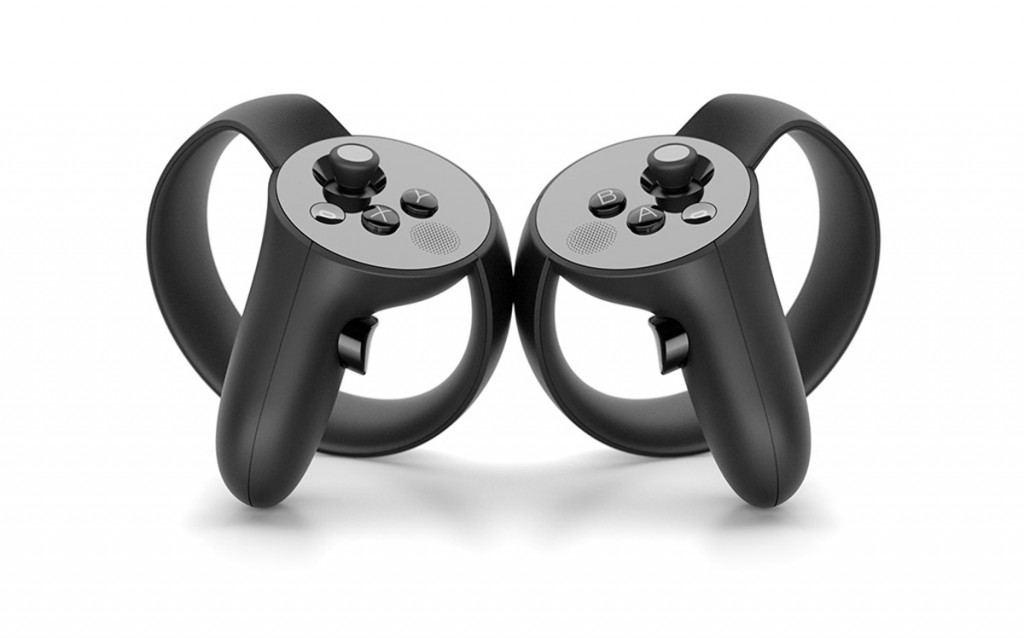 The Oculus Touch launch went well and the controllers have reviewed very positively.

My comments were passed on to the UK PR firm Hello Unity, which offered the following official response from Oculus:

“Retail expansion is the first of many steps towards getting VR to reach as many people as possible. Which is to say that Oculus may be stocked in the stores you mention in the future, although we don't have any further information to share at the moment.”

This is not an unsurprising comment from Oculus, as I have had similarly vague responses from the firm in the past. It is however frustrating in that it tells us nothing of why it is that Oculus VR would choose to shun almost all of the top PC hardware sellers in the UK.

It leaves us to speculate, which while fun is never quite as satisfying as the truth.

Still, in the position we are in, we can look objectively at the evidence we have. The only retailers I could find that were stocking Oculus Rift headsets were Amazon, PC World, Curry's, John Lewis and GAME. The former four have little to do with gaming at all, with one not even having a strong focus on electronics. GAME does of course have a predominantly gaming audience, but it's much more console players than PC ones – even if it recently teamed up with OCUK, which makes Oculus' choices even stranger.

One theme does unite those four retailers however and that is that they are all very mainstream. I mean that in a sense that they are all household names outside of the gaming world. Perhaps that's Oculus target with its retail strategy: non-gaming, mainstream stores. It wants your nan to buy a Rift before your Minecraft playing brother.

It has seemed for a while that Oculus' big focus under Facebook hasn't been PC gaming, but shared, social experiences. That may be a good plan for the long term as of course like any industry, the real money is in the casual fans, not the hardcore ones.

Hardware like desktops and laptops are used predominantly by people for non gaming tasks, and that goes doubly so for devices like tablets and smartphones, even if games go a long way to encouraging development of newer and more powerful hardware advances.

The reason that same strategy seems so strange with the Rift though, is that you require a powerful system to run it. Targeting mainstream users with under powered systems is either going to leave them disappointed, or unable to buy because of not meeting specifications. 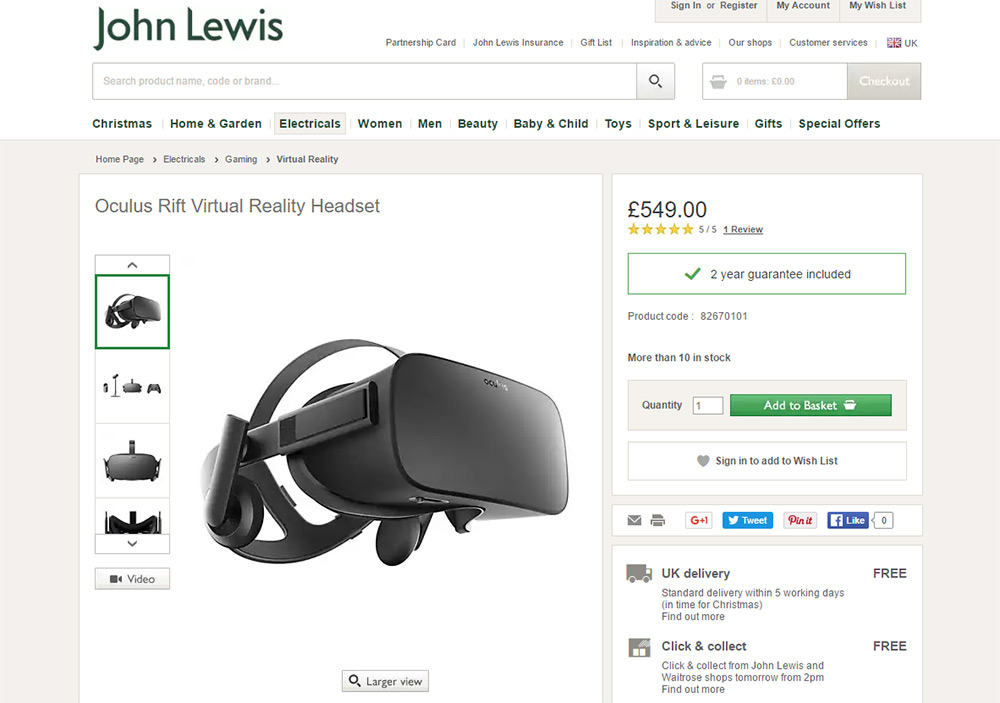 Why oh why would Oculus partner with John Lewis?

Notice that on the John Lewis site there is just one review for the Oculus Rift. This is one of the world's premier VR headsets and nobody on there is interested. Compare that to the reviews on Scan's HTC Vive listing, where there are hundreds of reviews and you have to imagine Oculus is missing out on a lot of sales due to strange retail tactics.

At a guess, I would say that Oculus is looking to embed the Rift brand in to society, rather than looking to sell a lot of headsets. Of course it doesn't have to with Facebook money behind it, but when understanding VR relies so much on first hand experience, getting the hardware out there seems like a better idea than simply making sure consumers see it on store shelves.

Gamers may not be the ultimate audience for VR – when we are all VR-calling our grandparents across the world, sitting in a virtual living room together, nobody may remember that it was gamers who first strapped these bulky pieces of kit to our face to go out shooting zombies. But right now, it's the gamers who are buying these headsets.

Not making its hardware available to that audience by only working with retailers that target non-PC gamers seems like a truly bizarre move by Oculus.

KitGuru Says: Oculus Rift owners – where did you buy yours from? I know me and some friends grabbed them straight from Oculus (as preorders), but those of you who picked one up in recent months, be honest: did you buy it from John Lewis?